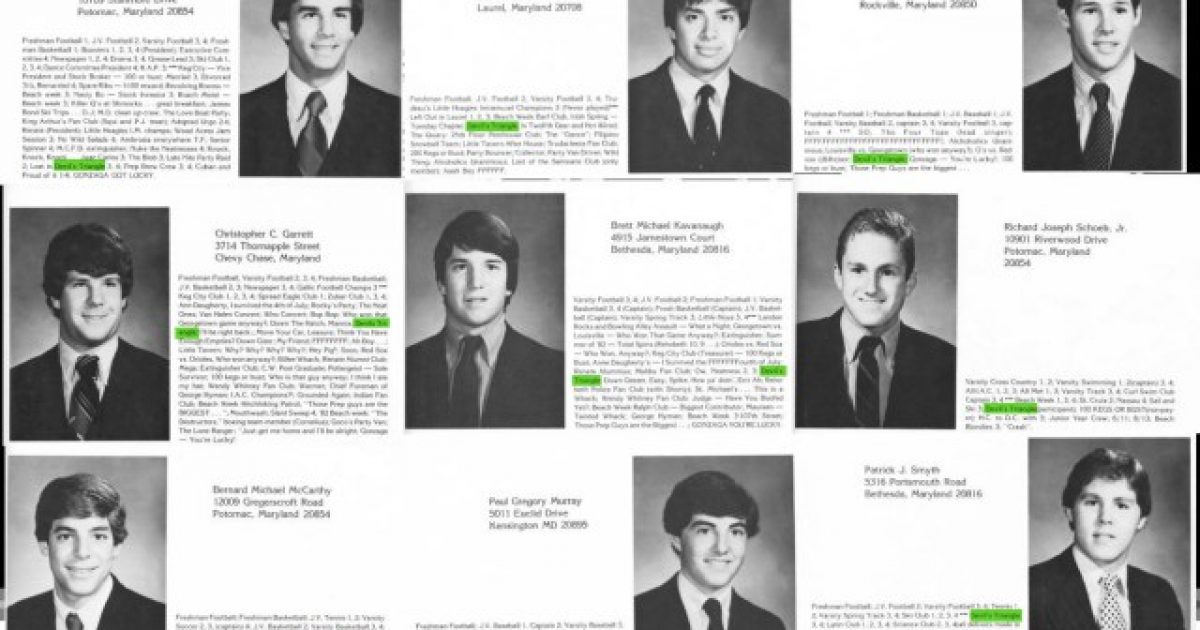 After exposing Christine Blasey Ford’s yearbook and archiving it (here, here, here and here), Brett Kavanaugh’s yearbook has been released and guess what? All of his explanations under oath of what was meant by “FFFFFF” and “Devil’s Triangle” meant exactly what he said.

Now, we know for a fact that creepy attorney Michael Avenatti’s claim that the phrase “FFFFFFFourth of July” does not stands for, “Find them, French them, Feel them, Finger them, F*** them, Forget them.”

Brett Kavanaugh must also be asked about this entry in his yearbook: "FFFFFFFourth of July." We believe that this stands for: Find them, French them, Feel them, Finger them, F*ck them, Forget them. As well as the term "Devil's Triangle." Perhaps Sen. Grassley can ask him. #Basta

Take a look as you can see in the yearbook that it was just as Kavanaugh said. As for Kavanaugh’s claim that the “Devil’s Triangle” was nothing more than a drinking game, not a code for gang rape, the yearbook bears that out as well. As far as I’m concerned, the people of Rhode Island should be embarrassed that they are represented by such an incompetent moron as Sheldon Whitehouse. On top of that, the fact that he would even think those terms are somehow tied to inappropriate sexual activity says more about Whitehouse than it ever could about Judge Kavanaugh.

And as far as the “ralph” phrase goes, I’m even familiar with that as nothing more than a reference to the technicolor yawn, or vomiting. Kavanaugh told the truth on that too, and who wouldn’t?

BREAK NEWS: No, Kavanaugh didn't lie. Yes, Kavanaugh was a pantywaist when it came to holding his beer down. I really can't believe FBI is tasked with this investigation. pic.twitter.com/kgBxCpvEUU

In seeing the evidence, one might actually conclude that Sheldon Whitehouse maybe have been involved in some of the very things that he tried to paint Judge Kavanaugh with.

The fact that the FBI has found nothing is not really surprising given that they had done at least six extensive background checks on Judge Kavanaugh over the years.

Still, even having an investigation and the results, these criminal senators wouldn’t even take the word of the FBI once they conducted their investigation.

Well, there was no need to do that. Both of them testified under oath. There were already numerous statements, under penalty of perjury, that those named at the alleged event all said it didn’t happen. There was no case here in the first place and no prosecutor would have ever taken it.

So, once again, we see that Judge Kavanaugh told the truth. He really does need to sue the pants off of every last person that has accused him. After all, they have to bear the burden of proof, not Judge Kavanaugh.