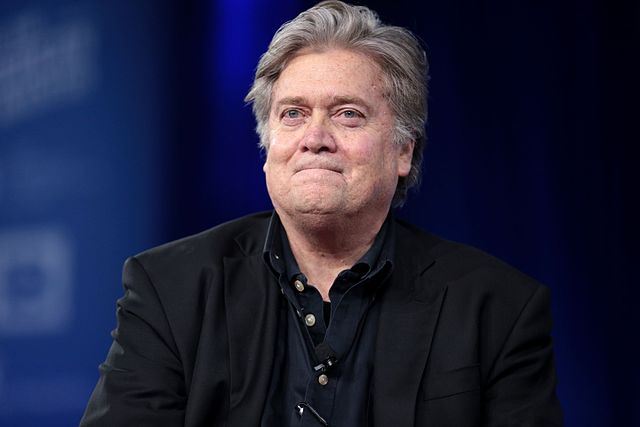 The Southern District of New York’s Audrey Strauss had Brian Kolfage, Steve Bannon and others arrested for allegedly funneling hundreds of thousands of dollars from the $25 million “We Build The Wall” GoFundMe campaign into their own pockets.

“Kolfage covertly took for his personal use more than $350,000 in funds that donors had given to We Build the Wall, while BANNON, through a non-profit organization under his control (“Non-Profit-1″), received over $1 million from We Build the Wall, at least some of which BANNON used to cover hundreds of thousands of dollars in BANNON’s personal expenses,” the SDNY’s statement claimed.

Leaders of ‘We Build The Wall’ online fundraising campaign charged with defrauding hundreds of thousands of donors https://t.co/cH2abWm2Ph pic.twitter.com/NKxfKXkcEX

From Justice.gov, U.S. Attorney’s Office for the Southern District of New York:

Brian Kolfage, Stephen Bannon, and Two Others Alleged to Have Funneled Hundreds of Thousands of Dollars From the Organization to Kolfage; All Four Defendants Allegedly Profited From Their Roles in the Scheme

Acting U.S. Attorney Audrey Strauss said: “As alleged, the defendants defrauded hundreds of thousands of donors, capitalizing on their interest in funding a border wall to raise millions of dollars, under the false pretense that all of that money would be spent on construction. While repeatedly assuring donors that Brian Kolfage, the founder and public face of We Build the Wall, would not be paid a cent, the defendants secretly schemed to pass hundreds of thousands of dollars to Kolfage, which he used to fund his lavish lifestyle. We thank the USPIS for their partnership in investigating this case, and we remain dedicated to rooting out and prosecuting fraud wherever we find it.”

Inspector-in-Charge Philip R. Bartlett said: “The defendants allegedly engaged in fraud when they misrepresented the true use of donated funds. As alleged, not only did they lie to donors, they schemed to hide their misappropriation of funds by creating sham invoices and accounts to launder donations and cover up their crimes, showing no regard for the law or the truth. This case should serve as a warning to other fraudsters that no one is above the law, not even a disabled war veteran or a millionaire political strategist.”

According to the Indictment[1] unsealed today in Manhattan federal court:

Starting in approximately December 2018, BRIAN KOLFAGE, STEPHEN BANNON, ANDREW BADOLATO, and TIMOTHY SHEA, and others, orchestrated a scheme to defraud hundreds of thousands of donors, including donors in the Southern District of New York, in connection with an online crowdfunding campaign ultimately known as “We Build The Wall” that raised more than $25 million to build a wall along the southern border of the United States. In particular, to induce donors to donate to the campaign, KOLFAGE repeatedly and falsely assured the public that he would “not take a penny in salary or compensation” and that “100% of the funds raised . . . will be used in the execution of our mission and purpose” because, as BANNON publicly stated, “we’re a volunteer organization.”

Those representations were false. In truth, KOLFAGE, BANNON, BADOLATO, and SHEA received hundreds of thousands of dollars in donor funds from We Build the Wall, which they each used in a manner inconsistent with the organization’s public representations. In particular, KOLFAGE covertly took for his personal use more than $350,000 in funds that donors had given to We Build the Wall, while BANNON, through a non-profit organization under his control (“Non-Profit-1”), received over $1 million from We Build the Wall, at least some of which BANNON used to cover hundreds of thousands of dollars in BANNON’s personal expenses. To conceal the payments to KOLFAGE from We Build the Wall, KOLFAGE, BANNON, BADOLATO, and SHEA devised a scheme to route those payments from We Build the Wall to KOLFAGE indirectly through Non-Profit-1 and a shell company under SHEA’s control, among other avenues. They did so by using fake invoices and sham “vendor” arrangements, among other ways, to ensure, as KOLFAGE noted in a text message to BADOLATO, that his pay arrangement remained “confidential” and kept on a “need to know” basis.

The statutory maximum penalties are prescribed by Congress and are provided here for informational purposes only, as any sentencing of the defendants would be determined by the judge.

The case is being handled by the Office’s Public Corruption Unit. Assistant United States Attorneys Nicolas Roos, Alison G. Moe, and Robert B. Sobelman are in charge of the prosecution.

The charges contained in the Indictment are merely accusations. The defendants are presumed innocent unless and until proven guilty.

[1] As the introductory phrase signifies, the entirety of the text of the Indictment, and the description of the Indictment set forth herein, constitute only allegations, and every fact described therein should be treated as an allegation.

I did not promote this campaign because I thought the notion that the public should pay for the wall just months after electing President Trump and a GOP-controlled House and Senate was ridiculous.

Trump could have started building the wall day one using executive power but he dragged his feet for over a year then put Jared Kushner in charge of it.

So far, they’ve built 5 miles of new wall and replaced and upgraded some 260 miles.

That said, it was pretty funny watching the total being raised go up and up with the GoFundMe target being a clearly unreachable $1 billion. I was under the assumption the funds would be returned if the $1 billion wasn’t met but at some point Kolfage seems to have changed the campaign into a We Build A Portion Of The Wall campaign so he could tap into the money.

It seemed pretty untoward at the time but donors were given the chance to get their money back but most chose not to as the campaign was being heavily promoted by Breitbart, Fox News and other popular right-wing sites.

To their credit, The Daily Caller had a good exposé of Kolfage at the time which made me even more skeptical.

Steve Bannon was charged with scamming hundreds of thousands through Brian Kolfage's border wall non-profit — Daily Caller News Foundations' @AndrewKerrNC reported on just how sketchy Kolfage and the op were back in 2019https://t.co/V8JJwc2oAJhttps://t.co/v5jfFRSYrD

Bannon has since ensconced himself in the bosom of Chinese billionaire Guo Wengui and he was reportedly arrested on his yacht on Thursday morning.

That said, I don’t doubt that this indictment was still politically motivated. Everyone who helped Trump win in 2016 is being thrown in prison as revenge.

Our political class is so corrupt pretty much everyone could be indicted for something but it’s only Trump’s allies who are being run through the wringer.

Audrey Strauss indicted Ghislaine Maxwell last month and I have a sneaking suspicion she’s going to have her accuse Trump of all manners of horrible wrongdoings right before the election (while Maxwell’s intelligence ties are quietly swept under the rug).