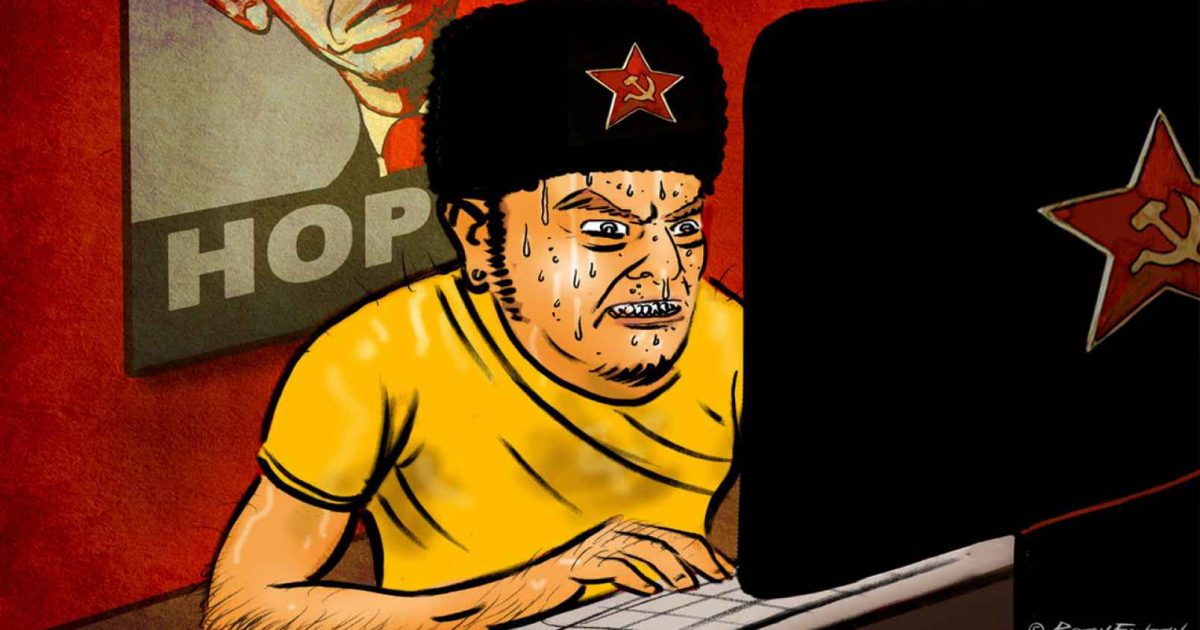 When the Democrats and the media wanted to prove that Russian trolls were everywhere, and supporting Republicans, they turned to Jonathon Morgan and Renee DiResta.

Morgan and DiResta had originally been part of Obama’s futile effort to fight ISIS on social media, before discovering a much more lucrative field. ISIS was losing on the battlefield and the Democrats were losing elections. The Hillary campaign had hatched a conspiracy theory blaming its loss on Russian trolls. And Morgan and DiResta soon became the experts providing the data linking Republicans to Russian trolls.

Every time there was a story on Russian election interference, Morgan would show up on CNN or NBC. And his message was the same, the Russian bots were everywhere and they were a major threat.

Morgan and DiResta soon had a company name, New Knowledge, and were brought on board by the Senate Intelligence Committee to produce a report on Russian influence operations in the 2016 election. Despite the fact that a second report found that most of the Russian trolling efforts had been directed at African-Americans, the New Knowledge report claimed that this was a Russian conspiracy to aid Trump.

The New York Times, which frequently promoted and published New Knowledge conspiracy theories, all but credited DiResta for having exposed the whole Russian-Republican troll conspiracy, and wrote that, “Senate and House staff members, who knew of DiResta’s expertise through her public reports and her previous work advising the Obama administration on disinformation campaigns, had reached out to her and others to help them prepare for the hearings.” They seemingly included Senator Warner’s office.

And it wasn’t just the 2016 election. Morgan, who made no secret of his loathing for conservatives, claimed that the Russian bots were everything and aiding Republicans.

When the #ReleasetheMemo hashtag went viral, Morgan, now running his own company, New Knowledge, was there suggesting it might be Russian bots. The debates about gun control after the Parkland school massacre? More Russian bots. The migrant caravan? Obviously a fake news conspiracy.

And the midterm elections?

“Russians Meddling in the Midterms? Here’s the Data,” Morgan and Ryan Fox, a New Knowledge employee, warned. “Our company is currently detecting more overall activity in real time from continuing Russian online influence operations targeting the midterm elections than has been disclosed by social media platforms or detected by researchers during the same period before the election in 2016.”

The Russians were even going all the way into Alabama. “Russian trolls tracked by #Hamilton68 are taking an interest in the AL Senate race. What a surprise,” Morgan tweeted.

It wouldn’t have been much of a surprise to him because the “Russian trolls” supporting Roy Moore in Alabama were actually his trolls.

A New York Times story was forced to reveal that Morgan had participated in what a report described as, “an elaborate ‘false flag’ operation that planted the idea that the Moore campaign was amplified on social media by a Russian botnet” thereby “radicalizing Democrats with a Russian bot scandal”

The goal was to “enrage and energize Democrats” and “depress turnout” among Republicans.

The bots used Cyrillic letters and pictures of celebrities. Just in case anyone still didn’t get the message, they included, “I love Russia” in their profiles. When the Moore campaign accused the Democrats of being behind the dirty trick, the Jones campaign doubled down on the Russia smear, declaring, “Maybe Moore should check with Vladimir Putin, who shares his views on depriving people of their civil rights.”

But Moore had been telling the truth. It had been a Democrat operation. The media’s greatest expert on Russian trolling had not only falsely claimed that Russian trolls were backing Moore: he was involved.

Morgan, the New York Times and the Washington Post attempted to spin this as an experiment, but influencing an actual election is not an experiment. When Morgan’s people faked Russian bot support for a Republican candidate, and Morgan then helped spread the allegations, that’s not an experiment, it’s a dirty trick. And it raises serious questions about the Democrat’s entire Russian troll narrative.

How can we know that an Alabama special election was the only time that Democrats tried to frame Republicans with false flag operations meant to portray them as traitors and tools of foreign interests?

The Alabama project may have been an experiment, but not an abstract academic one. Its funding allegedly came from LinkedIn billionaire Reid Hoffman who has poured millions of dollars into ventures to harness “Silicon Valley” smarts to help Democrats win. Hoffman had previously been caught backing another slimy Facebook effort targeting conservatives and Trump supporters.

Hoffman had teamed up with Mark Pincus, the co-founder of Zynga, a slimy Facebook firm whose unofficial motto was allegedly, “Do Evil”, on WTF, to explore new strategies. New Knowledge also had backing from French-Iranian billionaire Pierre Omidyar who had made his fortune with eBay. Silicon Valley lefties have been pouring money into new tech efforts for the Left.

It’s worth asking whether some of the dot-com billionaires who backed Morgan, New Knowledge or similar efforts to push regulation of Facebook had a plan for profiting from its fall.

The Alabama project’s success could have been used to convince Hoffman and other lefty dot com donors to back similar false flag campaigns targeting Republicans around the country.

Alabama likely was an experiment in tactics. Morgan’s exposure won’t make it go away.

Hillary’s Russian conspiracy theory has evolved into a Cloward-Piven strategy aimed at free speech on the internet in which disinformation is used to attribute conservative speech to a Russian conspiracy requiring immediate regulation of Facebook and other social media companies to avert the crisis.

And if the Russians won’t cooperate, the Russian bots will be lefty hipsters funded by Silicon Valley.

Jonathon Morgan had tweeted, “Facebook and the other social media companies should not be trusted to police themselves. The self-serving attempts to undermine the credibility of those holding these companies accountable are reprehensible.”

New Knowledge’s Director of Research, Renee DiResta, had written an editorial titled, “Why Facebook and Twitter Can’t Be Trusted to Police Themselves”.

After years of demanding that regulators force Facebook to crack down on Russian fake news trolls, Morgan finally got what he wanted when Facebook suspended his account over Russian trolling.

Russian election interference was a crisis that the Democrats had manufactured and that their media echo chamber had amplified. Morgan is accused of manufacturing it in the most explicit way possible.

But we can’t really know to what extent Morgan’s experiment has already been replicated. What we know about Russian election interference has largely come from experts like Morgan and New Knowledge. The internet is a shadowy realm and it’s not hard for actors to impersonate one another.

The Russians may have started out by impersonating Americans, only to have Americans impersonate Russians. When public trust in institutions fails, conspiracy theories and conspirators thrive. Morgan’s dirty tricks arose from the same paranoid atmosphere of conspiracy theories weaponized into investigations, opposition research transformed into armed raids, research being secretly planted into the DOJ, and national emergencies being declared over Facebook memes, in which he thrived.

To paraphrase Pogo, the Democrats had finally found the Russian troll enemy and he is us.