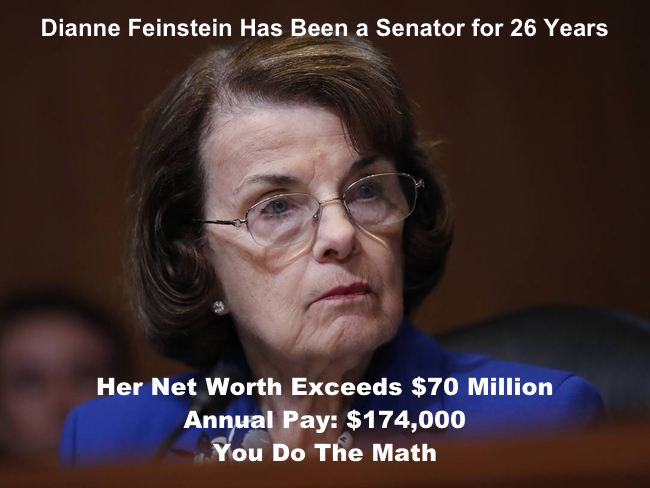 Editor: Feinstein was caught recently with Iran’s foreign minister’s contact info showing on her CELL PHONE. Yes, I did say her cell phone. Didn’t Hillary get in trouble for the same thing? Well, investigated anyway. Dianne Feinstein is very likely in violation of The Logan Act and should probably be locked up. -Dean

Opinion Of Elder Patriot – On Thursday we discussed how “unusual” we thought Dianne Feinstein’s (D-CA) with Iranian Foreign Minister Mohammad Javad Zarif, coming as it did, amid escalating U.S.-Iranian tensions. It raised red flags for us about Democratic senator’s motives.

According to Politico’s Jake Sherman, who broke the story, Sen. Feinstein’s office told him that the dinner was “arranged in consultation with the State Department.”

The State Department denied giving Sen. Feinstein the thumbs up to meet with Zarif:

When Sherman contacted the White House, via multiple emails, for a statement he didn’t get a response.

Why has Feinstein chosen to become the second high-ranking Democrat to insinuate herself into the Trump administration’s harder-line negotiations with the radicalized Iranian regime?

Kerry was tracked imploring our European allies, as well as the Iranians to ignore President Trump’s policy towards the terrorist state in an attempt to save the Iranian nuclear deal.

There appears to be more to Feinstein’s decision to defy the State Department’s advice.

For the possible reason, recall this August 2014 article about Obama’s intentions towards Iran, written by Michael Ledeen, a former consultant to the National Security Council and U.S. Defense Department, titled Obama’s Latest Big Lie: ‘We Have No Strategy’:

The actual strategy is detente first, and then a full alliance with Iran throughout the Middle East and North Africa. It has been on display since before the beginning of the Obama administration. During his first presidential campaign in 2008, Mr. Obama used a secret back channel to Tehran to assure the mullahs that he was a friend of the Islamic Republic, and that they would be very happy with his policies. The secret channel was Ambassador William G. Miller, who served in Iran during the shah’s rule, as chief of staff for the Senate Select Committee on Intelligence, and as ambassador to Ukraine. Ambassador Miller has confirmed to me his conversations with Iranian leaders during the 2008 campaign.

Obama’s strategy would require realigning all of our relationships with Middle Eastern countries. The would upset the existing world order.

Let me suggest this would also mean that the existing system of transferring wealth from workers to the elites needed some adjustments. For politicians, whose votes are almost always for sale, Obama needed money… untraceable money.

Against this backdrop the JCPOA, that sent $150 Billion to Iran and an additional $1.6 Billion in cash, becomes understandable. There is reason to believe that much of the cash was used by Iran to bribe the Oligarchs of the E.U. to accept the deal.

If this is not the reason that both John Kerry and Dianne Feinstein have flaunted the Logan Act then I’m open to another explanation. Neither Kerry nor Feinstein have ever done anything for altruistic reasons.

Now consider the non-response from the White House.

Attorney General William Barr is in the process of conducting a widening range of investigations with the assistance of DNI Dan Coats, Secretary of State Mike Pompeo, CIA Director Gina Haspel, FBI Director Christopher Wray, and Director of the NSA Paul Nakasone.

This leads one to wonder what more is going to be discovered… or, perhaps has already been discovered about Barack Obama’s Manchurian presidency.

And, the members of Congress – from both sides of the aisle – who aided and abetted him.