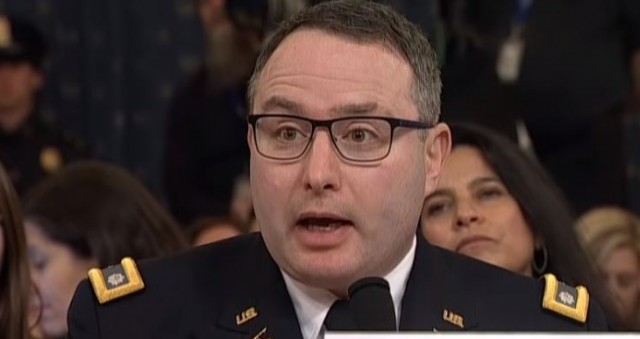 Vindman Claims Trump’s Ukraine Military Aid Delay ‘Concerned’ Him, But Why Didn’t He Call Out Obama For REFUSING To Arm Ukraine?

The Garbage Party and their propagandists in the “mainstream” media have told us that Army Lt. Col. Alexander Vindman is the “expert” on all things Ukraine and that he knows all there is to know about that country.

He’s told us that himself during his impeachment inquiry testimony. Yes, everyone knows, when it comes to Ukraine, ‘Vindman’s the guy on the National Security Council.’

Vindman, born in Ukraine and fluent in the language as well as Russian, was even asked, he says, three times by the Ukrainian government to be their defense minister.

He’s that much of a Ukrainian expert.

Lt. Col Vindman says that Ukraine repeatedly offered him to be the Minister of Defense for Ukraine. pic.twitter.com/NBr1Z0nPNU

Now, mind you, Ukraine is at war. The country is currently battling Russian-backed separatists in its eastern regions. This, after Russia swooped in with “little green men” in 2014 to swipe the Crimea from Ukraine.

We have to presume that a country at war against Russia would not make such a prestigious offer — three times — in a vacuum. Obviously, Ukraine thought Vindman was “their Ukraine guy” as well.

Which brings us full-circle to why he’s testifying before Adam Schiff’s impeachment clown show to begin with: He claims that he was “concerned” by what he overheard in a phone call between President Donald Trump and Ukrainian President Volodymyr Zelensky over the summer.

In particular, he says he upset at the temporary withholding of lethal military aid by Trump to Ukraine — aid which was nonetheless delivered.

Obama did nothing about it despite the fact that the U.S. signed an agreement in the mid-1990s — the Budapest Memorandum — pledging to help secure Ukraine if that country surrendered back to Russia hundreds of Soviet-era nuclear weapons, which it did.

Vindman didn’t have a problem with that, though. We know that because there was no similar effort mounted by Congress to proclaim it “wrong” and “impeachable” for Obama to have ignored Ukraine…in spite of a pledge to protect that country.

But here’s what Obama — through Vice President Joe Biden — did do to Ukraine: He threatened to withhold $1 billion in loan guarantees at a time when Kiev was at war needed the aid…to purchase weapons … that Obama never did agree to provide, never would provide, and never wanted to provide.

And remember when Biden bragged about this “quid pro quo” — threatening to withhold money for Ukraine, on Obama’s instructions, when Ukraine was at war with Russia, unless Ukraine fired a prosecutor who was investigating a corrupt company that had retained his son, Hunter Biden, as ‘board member’ — for $83k a month?

We do. Biden bragged about it on video before the Council on Foreign Relations.

But do you know what’s odd? Vindman, the Ukraine expert, who was asked three times to be Ukrainian defense minister, didn’t know anything at all about Biden’s threat.

…[T]he striking thing is that none of these people that have testified cared a whit that Obama didn’t come through with assistance for Ukraine, and all of them, every single one of them claims to have no knowledge at all about what Biden was doing meddling around in internal Ukraine domestic affairs.

I mean, when you’re the vice president of the United States and you demand that Ukraine, a foreign country, fire a prosecutor ’cause he’s getting too close to your kid and then you brag about it to the Council on Foreign Relations and it’s on videotape, and these people claim they didn’t know anything about that? And yet we’re supposed to respect them as far more knowledgeable than any of us on Ukraine.

So, Biden’s threat didn’t upset Vindman (because he allegedly ‘didn’t know’ about it), and Obama’s refusal to honor a 1990s-era agreement to help secure Ukraine didn’t upset him either.

But Trump’s slight delay in providing lethal military aid — something Obama never did — to Ukraine so it can defend itself is a problem for Vindman.

If you believe that, or that Vindman knew nothing about Biden’s threat, then we have some oceanfront property in Colorado to sell you.

*Some edits may have been made.