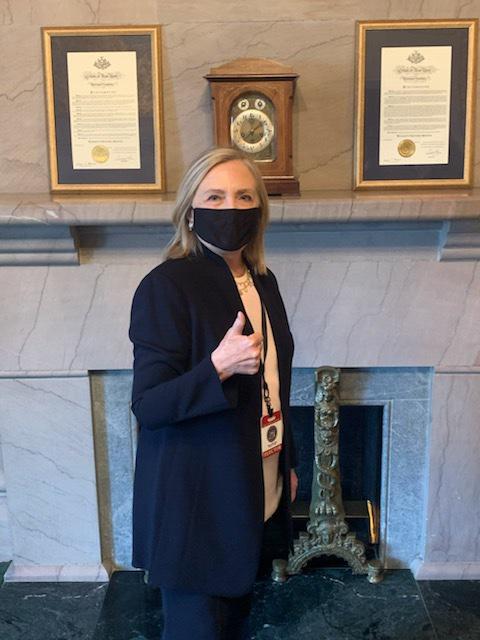 And this is the story, I’ve said over and over and over again. The only reason there was a Biden candidate is because President Donald Trump and his administration did everything under the sun except the one thing his job demanded: “…take Care that the Laws be faithfully executed…” against him for his treason. Now, we can say that the only reason that Bill and Hillary Clinton were allowed to be delegates to the Electoral College and cast votes for Joe Biden is because Trump failed to execute the laws against them for their crimes too.

On Monday, Mrs. Clinton tweeted, “I believe we should abolish the Electoral College and select our president by the winner of the popular vote, same as every other office. But while it still exists, I was proud to cast my vote in New York for Joe Biden and Kamala Harris.”

I believe we should abolish the Electoral College and select our president by the winner of the popular vote, same as every other office.

But while it still exists, I was proud to cast my vote in New York for Joe Biden and Kamala Harris. pic.twitter.com/th9qebu9ka

Of course, she does, but then she is a Communist, so therein lies the problem.

Former Democratic presidential nominee Hillary Clinton and former President Bill Clinton cast their New York Electoral College votes for President-elect Joe Biden and Vice President-elect Kamala Harris in Albany on Monday.
The Clintons are two of 29 electors for New York, along with Gov. Andrew Cuomo (D).The former secretary of State ran against President Trump in 2016, winning the popular vote, but losing the Electoral College by 77 votes. Bill Clinton cast an electoral vote for his wife in 2016.

Hillary Clinton first announced she was an elector in October, saying it was “pretty exciting” to have the opportunity to cast an electoral vote for Biden and Harris.

All 538 electors met in state legislatures across the country on Monday to formally cast their ballots for president. The meetings will further solidify Biden’s presidential victory even as Trump continues to claim, without evidence, he only lost due to widespread voter fraud.

Well, whose job is it to execute the law against her? It’s Trump’s (Article 2, Section 3)!

But then again, this is the same man who immediately after winning the White House said this:

And we shouldn’t fail to mention that once in the White House, Trump was “honored” to have Bill and Hillary, his friends he didn’t want to hurt, in attendance at the inaugural luncheon.

And let’s not forget Trump’s declaration against Obama and Biden.

You see, the Qult of personality aren’t serious about their liberty. They are merely entertained with political fodder, mere words, but no substance nor action.

Thus, now you have the same criminals set to go right back into DC in January.

Perhaps, it’s time we seriously considered secession and choke off the beast once and for all.