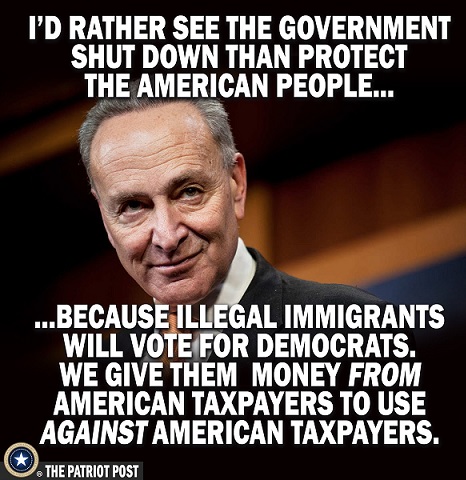 California is a “sanctuary” state that violates U.S. immigration laws by giving shelter to people who are here illegally. According to a just-released Yale-MIT study, there are 22 million “undocumented immigrants,” i.e., illegal aliens in the U.S.

In a news release yesterday, October 18, 2019, California Governor Gavin Newsom, a Democrat, announced that he has granted four pardons and two commutations.

But the news release doesn’t name or identify who the recipients of the governor’s pardons and commutations are; one must click on a link to a State of California Executive Department’s PDF document on “Pardons” to find out. It turns out that three of Newsom’s pardons are facing deportation to their countries of origin.

FoxNews reports that the three men — originally from El Salvador, Iran and Cambodia — broke the law as teens or young adults, served their sentences and have taken steps to rehabilitate themselves, the governor’s office said.

According to reporter Sophia Bollag of the Sacramento Bee, Gov. Newsom pardoned the three “to spare them from deportation…arguing they reformed their lives after making mistakes when they were young and should not be sent out of the country.”

Here are the three men whom Newsom had pardoned so that they would not be deported (sources: State of California Executive Department’s PDF document on “Pardons”; Sacramento Bee):

According to FoxNews, Gov. Newsom’s office claims that all three men live in Los Angeles County and were brought to the U.S. legally as children:

That makes no sense.

If all three men, when they were children, had been brought to the United States legally by their parents, why would they now face deportation?