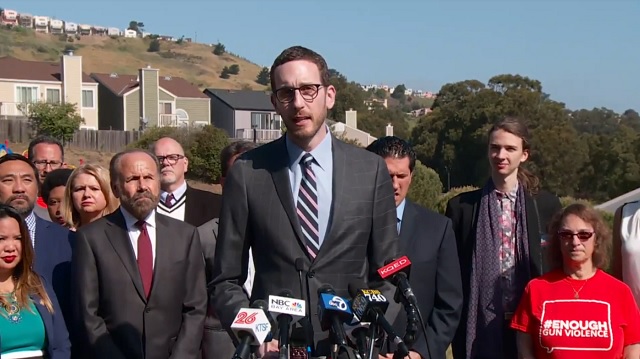 California lawmakers are going to war with the Second Amendment.

A series of four anti-gun bills were approved late this week and are heading to Gov. Jerry Brown for signature. The measures — Assembly Bill 2888 and Senate Bills 221, 1100, and 1177 — passed the state legislature and now head to the state’s Democratic governor for further consideration.

AB 2888 would expand who can file for one of California’s Gun Violence Restraining Orders, adding coworkers, employers, and school employees to the list that currently includes family members and police. Such orders, largely pioneered by the state, have been derided as “turn in your neighbor” laws as they allow for temporary gun seizures with the accused only able to appear in court after the fact in many cases. […]

The second measure, SB 221, would prohibit the sale of firearms and ammunition at the state-owned Cow Palace in Daly City. The historic venue has long been the location of numerous gun shows throughout the years, which has drawn the ire of Democrats from nearby San Francisco, a city that regulated its last gun shop out of business in 2015. […]

“Our country is awash in guns, and schoolchildren are dying,” said the bill’s sponsor, state Sen. Scott Wiener D-San Francisco. “We need fewer guns, and we need to stop the proliferation of guns whose only purpose is to kill as many people as possible as quickly as possible.”

Though Wiener says he wants to stop the proliferation of guns, he’s best known for getting a bill passed which will likely increase the proliferation of HIV/AIDS by reducing the penalty for knowingly infecting a sexual partner with HIV without disclosing your HIV-positive status from a felony to a misdemeanor.

While he’s lowering the penalty for knowingly infecting people with HIV, he’s jacking up penalties for gun ownership.

Also headed to Brown is Sen. Anthony Portantino’s SB 1100 that would bar firearm sales to those under 21 years of age. […]

Another of Portantino’s proposals, SB 1177, aims to ration all firearm purchases to one every 30 days. […]

The move this week grows the stack of gun control expansions on Brown’s desk to eight, following just days after legislators forwarded him a quartet of bills to expand lifetime gun bans and make it harder to get a concealed carry permit. He has until Sept. 30 to sign or veto the bills.

California used to be a Republican state. All that changed thanks to mass immigration.

We need a wall and we need it now.