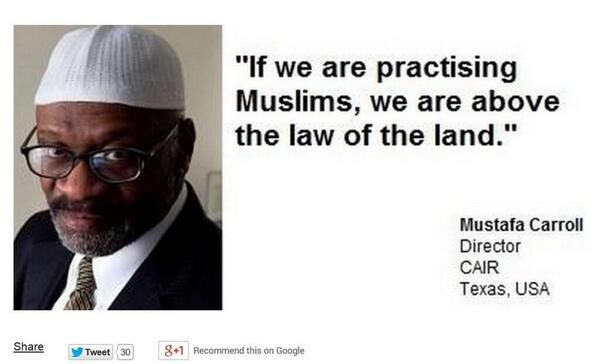 According to the leader of the Council on American-Islamic Relations, Muslims living in America should not be bound by U.S. law. “If we are practicing Muslims, we are above the law of the land,” said Herman Mustafa Carroll, executive director of the Dallas-Fort Worth CAIR branch.

I suppose at the very least, Carroll is being honest about what practicing Muslims believe. This is what we’ve been telling people all along. Now CAIR is becoming a bit more vocal about what they are really about.

Carroll made the statement at a rally in Austin, Texas as part of a nationwide effort to hold “Muslim Capitol Day” events. According to the event website Muslims came to the Texas capitol to “promote civic and political activism throughout the wider Muslim community.”

It appears to me that they are promoting jihad and lawlessness. “We tried to downplay Sharia, because we didn’t want to give the other side any excitement for being here,” he said.

He then attempted to dismiss his critics as “anti-foreign.” I wonder if we should just out him now as “anti-American,” since he thinks he is above the laws of America.

“When you even say the word Sharia, people get nervous. We are not advocating for Sharia. We are not trying to make Sharia the law of the land,” he said.

While saying that Muslims only want the right to practice their faith, Carroll also included this little tidbit. “If you understand Sharia, the foundation of our faith … how we treat our neighbor, how we treat our parents … how we participate in society, all of that is part of Sharia.”

He must have intentionally left out the parts about jihad, honor killings and treating women and infidels as chattel, while seemingly speaking about harmless treatment of neighbors and parents.

They discussed “the recent House and Senate bill proposals involving the implementation of ‘anti-Sharia’ legislation, where the First Amendment rights and freedoms of Muslims would ultimately be hindered.”

Carroll attempted to downplay Sharia law, despite joining with the ACLU to oppose the anti-Sharia legislation in Texas.

I told you about how the federal government was seeking to close the mouths of free speech in regards to Islam back in June. I don’t recall Mr. Carroll standing up and opposing that. In fact, his organization didn’t make a peep about that, which simply means they are complicit in it.

The event even included a speech by a representative of Farrakhan and the Nation of Islam, who declared that Texas was an awful place and that Islam was the answer.

“Why did Muhammad say that he would not rest until the Koran was the law of the land?”

“Islam does not have Texas in the current condition, the current socio-political condition that Texas is in. What is this condition that Texas is in? Why is Texas on the brink, when you look at Texas in comparison to 50 states, education, percent of population graduating from high school is 46, high school completion rate is 46, the scholastic assessment rate, the SAT score in Texas is 47, the percentage of population with no health insurance in Texas is first, those without health insurance Texas is first. When you look at the state of a child in Texas, the percentage of uninsured children, Texas is first… etc etc

You shouldn’t be filing legislation against Islam, when you look at Texas, Islam is not the problem. Islam is the solution. Allah Akbar.”

However, Carroll has also defended terrorists on the same grounds as his statement above; Muslims are above the law of the land.

Now ask yourself, those that read the Qur’an believe they are above the law of the land and some even go so far as to obey the words of the Qur’an and murder infidels. They both share a common core: The teachings of a demon-possessed pedophile, murdering thief named Mohammed.

Back in 2003, CAIR founder Omar Ahmad sought to bully a newspaper that quoted him saying:

“Islam isn’t in America to be equal to any other faith but to become dominant.”

For my friends who think Islam is not a threat to our society, let that one sink in.

For years Ahmad has been trying to seek a retraction from the newspaper, but to no avail as the paper stands by the article. I applaud their courage to do so and expose the attempts at taqiyya being put forth by Ahmad and his Muslim Brotherhood front group.