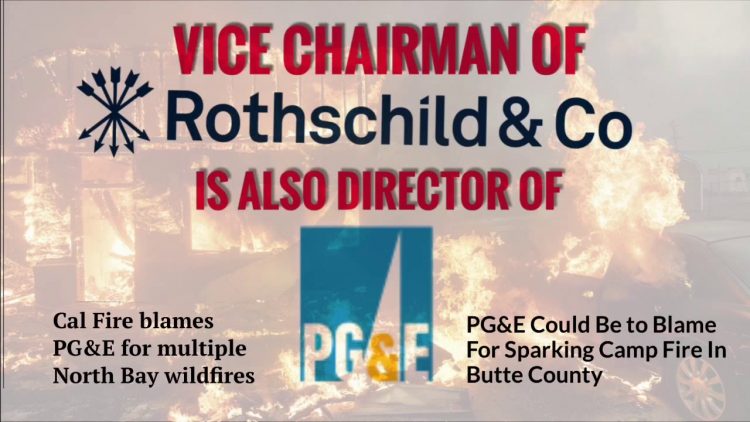 In a courageous moment, an activist took to the microphone to address Sonoma County Incorporated Board of Supervisors and point out what is actually behind the scenes of the power shut offs and fires in California. She also called out PG&E as being a “Rothschild division” out of London, which she says is “controlled by the banksters.”

Deborah Tavares of StopTheCrime.net provided the information on October 15, 2019, and said she was providing more for those in attendance than fro those who were their representatives.

“It’s really important to note that we all had hot water because we still had natural gas, which is on the cusp of being eliminated to each and every single one of you,” Tavares said. “So, think about that when the next power outage occurs because some of the counties are actually allowing payments for PG&E to remove gas lines.

She encouraged listeners to visit her site where she has documented “many conversations about what’s really behind the power outage in PG&E.”

She then warned the PG&E had “delphied” the county and pointed to Shirlee Zane as being one who had said they had been “corralled in a small room” and “not listened to.”

“PG&E is a Rothschild division controlled by the banksters,” Tavares said. “So, until we start really talking about the factual realities here, we’re going to keep playing badminton with people’s lives and our properties; and I can’t underscore enough also, did you know that the ham radio has been now reduced that the inverters are being eliminated so that we cannot operate local and among ourselves even to assist with communication? Did you know that? Our communication is being deliberately reduced.”

Tavares then made some comments about lights not working properly and not syncing up.

Her time limit was up, but she came back later during the meeting.

She called the corporation out by telling the people that “as a corporation, they cannot serve you, and they don’t.”

She then cited Civil Report 93-549 and said, “It has been discussed over the years and all the cities, all the counties, and all the jurisdictions are corporations.

Tavares then dropped a bombshell.

“It’s most important to understand this as people of this country and in our area being defrauded deliberately and what is most important is the climate emergency that has been declared in the counties here: This is the reality of the use of weather weapons.

“They’re hiding the climate emergencies behind the truth of weather weapons,” Tavares said.

She then points out that the information provided at her site demonstrates why those on the board have no jurisdiction.

She then reminds the public that they used to be given three minutes to speak, which isn’t much in itself, but now that time is down to two minutes. After all, there’s no need for those in charge to hear for those pesky people that they are supposed to serve, right?

She then said that it was the staffers who run the show at the meeting and she mockingly thanked them for her two minutes.

“We are the enemy,” Tavares said following the video statements. “They are stealing from us the idea; and the illusion of the legislative process is simply to keep us in check. It does not exist and we’re watching a puppet show in Washington DC and in your local City Councils and county boards and supervisors there they don’t have any jurisdiction.”

The following links are also provided with information to validate what Ms. Tavares stated.

Vegetation management requirement for all buildings

PACE FINANCING (Rockefeller/Rothschild Financing) IS COMING since people won’t be able to afford the “required” changes necessary to comply.

Cell Towers Knocked out during Power Shut Down (PSPS)!

CAP ADOPTED EVERYWHERE- WORLDWIDE!! CAP= Climate Action Plan You can’t Move, Run, Or Hide because these CAP’s have been adopted in every City, every County, every State, every Country, EVERYWHERE WORLDWIDE.

Ham Radio Repeaters Are Being reduced this reducing the public’s ability to communicate.

Read Senate Report 93-549 (We are the ENEMY): http://www.stopthecrime.net/trea.html