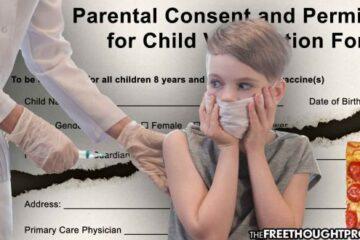 Los Angeles, CA — Maribel Duarte is not an anti-vaxxer, in fact, she is fully vaccinated as well as the rest of her family. However, her 13-year-old son suffers from allergy and lung conditions so she was holding off on getting him vaccinated due to these problems.

“Regarding my son’s health, I am against it,” she said.

Unfortunately, being against it is no longer an option, however, as the Los Angeles Unified School District (LAUSD) took it upon themselves to vaccinate her son for her — without her consent.

Duarte told NBC 4 News her 13-year-old son came home with a vaccine card after saying yes to being vaccinated in exchange for pizza at the Barack Obama Global Prep Academy school in South LA.

The LAUSD has also taken it upon themselves to mandate the COVID-19 vaccine for all children over the age of 12. They must receive the jab before January 10, 2022 or children will be forced into virtual learning and blocked from entering campus.

The statement on the LAUSD website read, “Attention families of students aged 12 or older—this is your reminder to get your child vaccinated.

Apparently, the district has since began a campaign to vaccinate students at school and is rewarding them with pizza. What’s more, according to Duarte, the unknown woman who vaccinated her son told her son to keep it a secret, so she wouldn’t get in trouble.

“The lady that gave him the shot and signed the paper told my son, ‘Please don’t say anything. I don’t want to get in trouble,’” Duarte said.

Several parents have since filed a lawsuit against the LAUSD for this very reason. NBC4 spoke to an attorney who is following these cases, Jennifer Kennedy, who explained that school districts do not have the authority to mandate medical procedures. But they are doing it anyway.

“These grotesque contests and displays of treatment and candy and gifts and favors, raffles and cash prizes inducing the kids to the vaccination…. Here is the problem, kids in California cannot consent to vaccination.”

She added, “The LAUSD does not have the power to add a vaccine to the California school schedule,” she said. “You couldn’t do it if you were a po-dunk school district and you can’t do it if you’re LAUSD, the second largest district in the nation. You don’t have that legal authority.”

Sadly, Kennedy explained that these mandates in schools have created a similar environment that is taking place in the adult world where children are shaming other kids for not getting the jab, alienating them, segregating them, and discriminating against them.

“Even the existence of the mandates in the schools has created these environments of pressure and bullying, segregation and discrimination and accidental vaccination of kids without parental consent,” Kennedy said.

According to other reports, the vaccine mandate has also caused a massive drop in enrollment. The LAUSD is the second-largest district in the United States and after it mandated the jab, they watched enrollment drop by more than 27,000 – or 6% – at the start of the school year.

According to NBC4, the school is refusing to elaborate on the program, only noting that they actually have a “safe schools to safe steps incentive program” which offers children prizes like pizza for taking the jab.

“It hurt to know he got a shot without my permission, without knowing and without signing any papers for him to get the shot,” Duarte said. Indeed. Many people reading this right now would likely not be as polite as Duarte is in the video below if this same thing happened to their child.

Sadly, it is happening in other states as well. As TFTP reported last month, a family in Louisiana filed a lawsuit against Ochsner medical group after they went to their son’s school and vaccinated him without their consent.

When the government assumes control over your child’s health, and does so without your consent, it is time remove those responsible from their positions of authority as they no longer represent a free society.