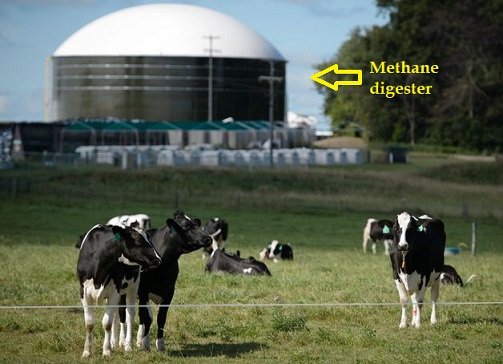 In September 2016, California governor Jerry Brown signed a bill to reduce greenhouse gas emissions to 40% below 1990 levels by 2030.

Adam Ashton reports for The Sacramento Bee that methane, a greenhouse gas like carbon dioxide, builds up in dairy manure pits, where farmers store waste for months until they can spread it on the crops they grow to feed their cows. Since agriculture accounts for more than half of California’s methane emissions, this makes it an obvious industry for the state’s Air Resources Board to regulate as it tries to meet the new law’s goal.

In order to comply with the new law, California’s dairy farmers have to purchase expensive methane digesters, each costing several million dollars, to convert the greenhouse gas emitted by cow manure into a source of renewable energy.

The digester covers the cow manure pit with a tarp. As the manure decomposes, methane lifts and becomes trapped under heavy plastic. Several times a day, a small power plant connected to the manure pit draws down the methane and burns it in the same manner that utilities use natural gas.

Daryl Maas, whose Redding-based Maas Energy Works manages the digester in the Van Warmerdam dairy farm, enthused: “We’re generating clean power, and we’re destroying a greenhouse gas. You can’t beat that!” Maas also earns as much as a quarter of his California revenue from selling “offset credits” to businesses that emit large quantities of carbon dioxide, such as oil refineries, which pay dairies with methane digesters to offset their pollution.

But the methane digesters are so expensive that dairies must win a grant to help them get started. A 2014 study from the California Energy Commission found that the digesters are not economically viable without grants. California expects to offer about $50 million in methane reduction grants to dairies, which would buy about 18 to 22 digesters. One dairy farm, the Van Warmerdams, received a grant of about $900,000 from the U.S. Department of Energy and the California Energy Commission to purchase a digester that uses manure from about 1,400 cows to power about 400 homes when it’s running at peak capacity.

Not only must the dairy farmers cobble together the money to purchase the expensive methane digesters, they must also find utilities that would buy the power the digesters generate from cow poop so as to recover the cost of the equipment. But finding utilities takes time away from full-time dairy farming.