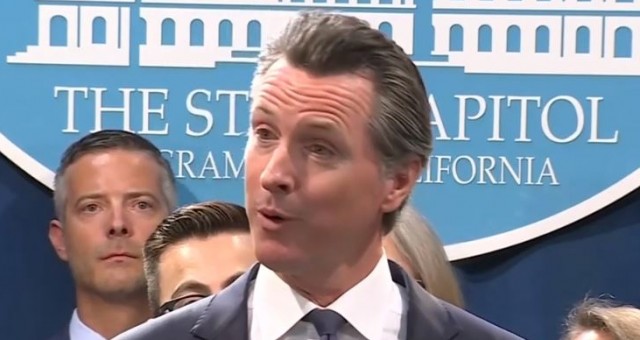 California Gov. Gavin Newsom and the vast majority of members of the state legislature accepted more than four million dollars to influence California politics by a FELON!

That’s right folks. Who is this felon? It’s the Pacific Gas and Electric Company a publicly-traded corporation with a monopoly over power service to four out of every 10 people living in California, according to a special report from Brandon Rittiman, Eric Escalante, Chelsea Shannon at ABC10.

The political donor’s crimes were connected to the deaths of eight people. Politicians knew that but took the money anyway.

PG&E’s felony convictions were related to the deadly 2010 San Bruno gas explosion, which killed eight people. A jury found PG&E guilty of five counts of willfully breaking federal gas pipeline safety laws and one count of obstructing the federal investigation into the disaster.

Since being sentenced in January 2017, state investigators say PG&E sparked wildfires that killed 107 people — including the deadly 2018 Camp Fire, which killed 85 people when it destroyed the entire town of Paradise.

Emma Colton at The Daily Caller News Foundation reports that California Gov. Gavin Newsom accepted big dollar donations in 2018 from the utility company now being vilified for shutting off large sections of the state’s electricity grid to avoid sparking wildfires.

Newsom and his allies took $208,400 from Pacific Gas and Electric during his run for governor before the public utility began controlled blackouts. PG&E gave the governor the maximum amount of $58,400 and gave another $150,000 to a political spending group supporting his candidacy.

The donations were revealed during a seven-month investigation by California’s ABC affiliate, whose probe was part of a documentary series breaking down California’s 2018 wildfire crisis. ABC10 published its findings in July.

Newsom’s office has not provided the Daily Caller News Foundation a statement regarding the donations.

PG&E also donated more than $800,000 directly to candidate campaigns, and another $3 million to political groups, most of which ultimately plowed that money back into candidate’s war chests, according to ABC10’s investigation.

The donations came less than a year before PG&E was hit for blacking out an estimated 940,000 homes and businesses in counties up and down California. PG&E is trying to prevent potential wildfires from spreading through the state while keeping tabs on downed power lines.

Newsom refused to answer questions in July when reporters asked about the donations. “It’s a strange question,” he told ABC10. “I don’t know what more I can say.”

I have a message for PG&E:

Your years and years of greed.

Years and years of mismanagement.

Years and years of putting shareholders over people.

The rolling blackouts could surpass those of the 750,000 customers who dealt with similar shut-offs earlier in October. Newsom started to circulate blame for many of the problems Californians are facing, including the blackouts and rising gas prices.

Meanwhile, several wildfires are ripping through the state. The so-called Kincade Fire, for instance, scorched over 54,000 acres as of Sunday evening. Nearly 94 buildings and other structures were burned and 80,000 more have been threatened, media reports show.

PG&E has not responded to the DCNF’s request for comment.

What a freaking mess.