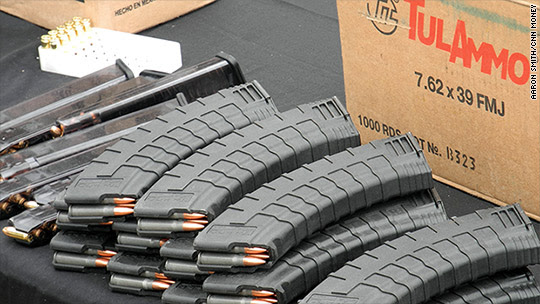 After Judge Roger Benitez ruled the California magazine Ban unconstitutional, California gun owners went crazy buying high capacity mags. In the one week period where the ban was no longer in effect, they bought at least 1 million high capacity magazines. That’s 1,000,000. That’s a lot of “freedom” in just the one week between the judge’s ruling and the injunction against it.

More than a million high-capacity ammunition magazines flooded into California during a one-week window created when a federal judge temporarily threw out the state’s ban, gun owners’ groups estimated on Thursday.

Reform groups said the projections are self-serving as gun rights organizations try to make the case that magazines holding more than 10 bullets are so common now that a ban is impractical.

The magazines aren’t tracked. But there are plenty of anecdotal evidence that the floodgates briefly opened when US District Judge Roger Benitez overturned the state’s nearly 20-year-old ban late last month.

The judge halted sales a week later, but ruled that those who bought the magazines can legally own them while the state appeals his ruling.

‘Everything was all sold out. I basically took whatever I could get,’ said Chris Puehse, who owns Foothill Ammo in Shingle Springs, east of Sacramento.

California’s AG Becerra was upset over the judge’s ruling in the first place, and said that the state was in “danger of becoming the wild, wild west.” Gotta love the overreaction of all liberals to anything that has to do with guns.

Puehse stated that people were stacked 20 deep in his store in an effort to purchase the magazines. He had to limit how many they could buy. But just one pallet contains 3,000 magazines, according to the Truth About Guns.

“The pipeline was open and it was flowing, on all platforms – people showing up (in stores), online – I’m guessing that UPS and FedEx had a field day. It was a frenzy.” Gun Owners of California president Sam Paredes

The ban was reinstated temporarily as the state appeals the ruling. California reportedly has at least 2.5 million gun owners that have at least 20 million guns. And that’s not counting the illegal guns owned by gangs and other criminals. It’s better to be armed and able to protect yourself and your loved ones than to be a victim. That’s what freedom is…the Cali liberals have never figured that out. They’re more concerned with controlling law abiding citizens that actually affecting the crime rate.

“People loved it. It was like we were out of prison and were not treated like bastard stepchildren of the country anymore.” Chris Puehse