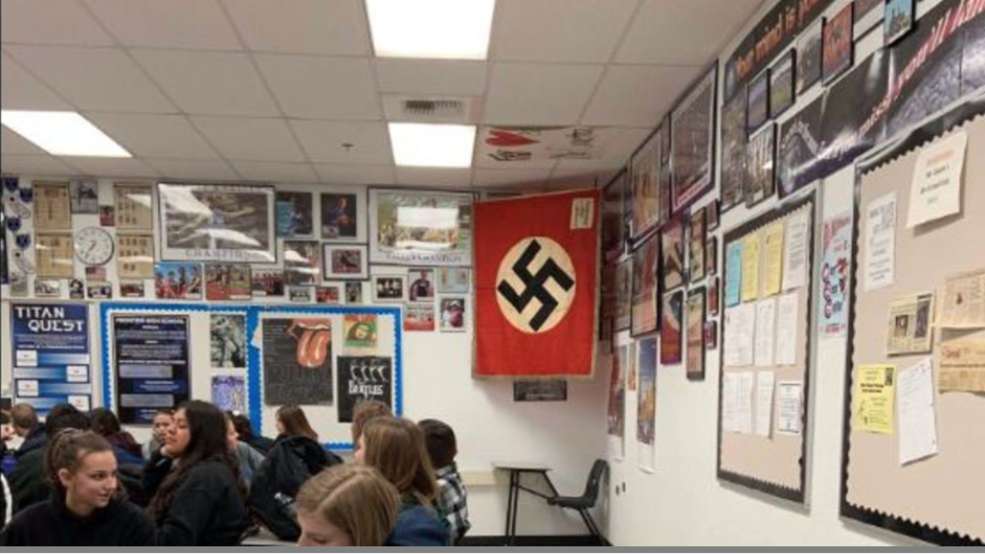 When the left is in control of your state……

BAKERSFIELD, Calif. (KBAK/KBFX) – A teacher at Frontier High School hung a Nazi flag in his world history classroom this week, prompting one concerned mother to reach out to Eyewitness News.

Roxanne Hartline tweeted a photo Thursday that her daughter, 15-year-old Vaniece Thomas, took in her classroom.

“So this evening, daughter says that the school knows about this & bcuz they’re studying the Holocaust “it’s okay”!! Um excuse me, they wouldn’t put up a poster of two people engaging in sex in health class! Why?!Bcuz it’s OFFENSIVE!” reads Hartline’s tweet.

Thomas told Eyewitness News on Friday that the teacher, David Gaeta, hangs the flag in his classroom every year while they study World War II and the Holocaust. After students shared that they were shocked by the Nazi symbolism in their classroom, Gaeta explained his reasoning for having it up, noting that it’s a flag given to him from a relative who served in WWII and would be taken down after the lesson was concluded, according to Thomas.

A Kern High School District spokeswoman said the lesson on WWII is two weeks, and students confirmed the flag typically stays up for the duration of the lesson.

“The only reason I wasn’t more mad about it was because it was Mr. Gaeta,” Thomas said, noting that he’s a well-liked teacher and she did not want him to suffer any consequences.

The photo tweeted by Hartline shows a handwritten message on the classroom ceiling: “We heart Gaeta.”

A Kern High School District spokeswoman said the flag, a decades-old artifact, was “strictly for the lesson,” and the district doesn’t plan any action against the teacher.

Lindsay Pearson, a Jewish student who graduated from Frontier in 2016, said students would often use anti-Semitic slurs and symbols against her.

“I would get swastikas on my desk all the time. I’d get called names,” Pearson said. “So seeing that in a classroom, hung by a teacher, was also just another, like, blow, you know?”

Pearson was not a student of Gaeda’s but would visit his classroom daily in her senior year, when she’d run passes from the front office to various classrooms.

“If he had just shown it on like a Powerpoint or something like that like my teacher did, um it wouldn’t be as big of an issue,” Pearson said. “But hanging it like it’s an American flag almost, is what I take issue with. It should not be so prominently displayed, and for several weeks at a time.”

“It is an interesting educational tool to have a piece of history like that,” Jacobson said, but noted, “it should just be a take out and put away piece.”

“I think when you hang something, you kind of give a certain respect to it. And there should be no respect for the item and its symbology on its own,” Jacobson said.

“It was part of history and part of a lesson, but it’s not something that’s hanging permanently in his classroom,” Public Information Officer Erin Briscoe-Clarke told Eyewitness News over the phone.

“This is the first time I’ve ever seen anyone be like, ‘this is not appropriate,’ and it’s surprising to me that it took this long honestly,” Pearson said.