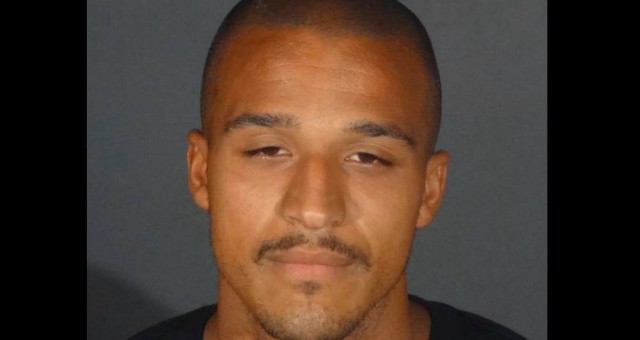 Glendora, California- On Wednesday, April 29th, at about 8:28 a.m., our officers responded to a call of a male who was attempting to break into a vehicle in the 1400 block of South Grand Ave. When we arrived, we contacted Dijon Landrum, M/24, from Monterey Park, as he was attempting to drive away in a stolen vehicle. (The vehicle had been stolen out of East Los Angeles.)

In addition to driving a stolen vehicle, he had stolen property and narcotics with him. Landrum was arrested.

Due to the California Zero-Bail Policy, he was issued a citation and released.

Approximately one hour after Landrum was released, at about 2:20 p.m., we received a call of unknown male in the area of Bennett and Pennsylvania. This male was carrying a box, and was walking through front yards of residences. It appeared that the male was placing items in this box as he was walking through the properties.

When we arrived, we contacted Dijon Landrum a second time, and it appeared he had property in his possession that did not belong to him.

Due to the California Zero-Bail Policy, he was issued a citation, and the property was recovered by our officers.

Several hours later, at 8:49 p.m., we received a call of a vehicle that had just been stolen out of a parking lot in the 1300 block of South Grand Ave. Our officers were able to track the vehicle and found it westbound on the 10 freeway in the area of La Puente. With assistance from outside agencies (LA County Sheriffs and California Highway Patrol), they located the vehicle and a pursuit began.

The pursuit ultimately ended in Pasadena, and Dijon Landrum was again arrested for being in possession of a stolen vehicle, and also for evading officers.

Due to the California Zero-Bail Policy, Landrum was released with his third citation of the day.

We want to thank all of the citizens that helped with this investigation, particularly those that called when they noticed something suspicious. If anyone has any additional information regarding any of these investigations, or noticed any suspicious activity on home surveillance cameras during that time frame that may be related, please contact our dispatch at 626-914-8250.