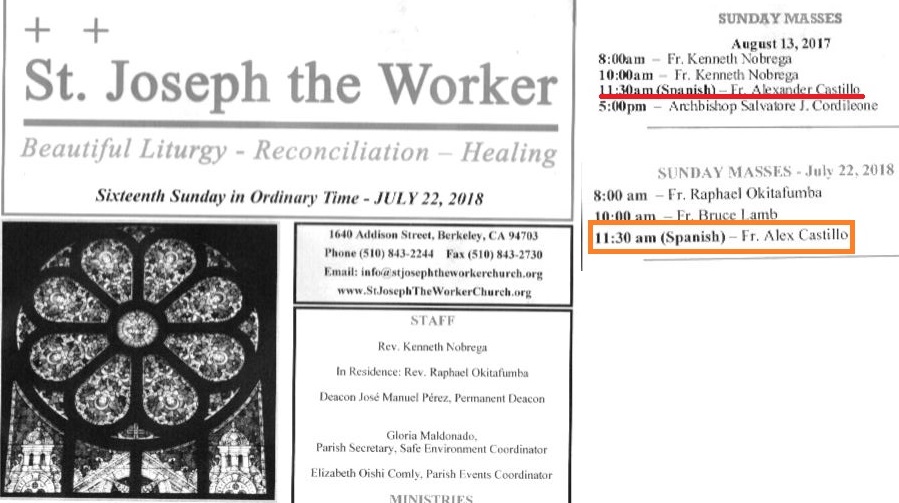 Fr. Alex Castillo, a priest of the Oakland diocese in the San Francisco Bay Area who was placed on administrative leave following an allegation of inappropriate sexual conduct with a minor, has fled the country.

On January 31, 2019, the Oakland diocese announced that Castillo is under investigation for alleged “inappropriate conduct with a minor” and placed on administrative leave, “not allowed to function publicly as a priest.”

It’s unclear when the alleged sexual misconduct occurred and when the allegation was made. Diocese officials said the case was referred to law enforcement because the church is a mandated reporter, but they did not provide any other details, claiming it “is normative for such a process.” But Melanie Sakoda, a Bay Area leader of the Survivors Network of those Abused by Priests (SNAP), said “I don’t think it’s particularly helpful for the diocese not to provide any additional information about the allegations or the priest.” (East Bay Times)

Castillo, a native of Costa Rica, worked at a software development company before joining the seminary. He came to the U.S. in 2008, completed his theological studies at St. Patrick’s Seminary in Menlo Park, and was ordained in 2011 by then-Bishop Salvatore Cordileone (now Archbishop of San Francisco).

Fluent in Spanish and English, Castillo organized and directed missionaries in Costa Rica, and, beginning in 2010, taught at the Serra Catechetical Institute for parents and instructors in the faith. He served at Saint Anthony Parish in Oakley and Our Lady of Guadalupe in Fremont, and directed the reopening of the Escuela de Ministerios Pastorales in 2013, where he was an academic dean and taught several courses. In 2014, he was appointed as Secretary to the Bishop and Episcopal Master of Ceremonies, in which capacity he assisted Bishop Michael C. Barber in public sermons. (Mercury News)

In October 2017, Bishop Barber called Castillo “inspiring” in an announcement of the appointment of Castilo as director of the Department of Faith Formation and Evangelization overseeing adult ministry. Barber said: “Father Castillo’s deep commitment to our faith and to the people of God in our diocese is inspiring. I know he will lead our work in faith formation and evangelization with integrity and fidelity.”

The (San Jose) Mercury News reports that on March 1, 2019, Oakland police informed diocesan officials that Castillo had fled the country, but officers would not say where he is.

According to the diocese’s chancellor, Steve Wilcox, Castillo had been living at Our Lady of Lourdes rectory in Oakland, “immediately” after he was placed on administrative leave, and that Castillo was looking for “groups of friends to live with for a few days until things calm down.” Wilcox said: “I don’t know whether he found someone to live with, whether it was in San Francisco or some other place. But he didn’t move. He wasn’t officially asked to move.”

Helen Osman, a spokeswoman for the church, said diocese officials last spoke to Castillo on Feb. 20. But attempts to reach him the next day, on Feb. 21, were unsuccessful. Diocesan staff attempted to file a missing persons report on Feb. 22, but were told to first contact “every jail and hospital in the area” before the police would accept the report. On February 23, a missing persons report was filed.

There are several troubling aspects of the Castillo case:

Clergy members along with teachers, medical professionals, law enforcement officials and others, are required under state law to immediately or as soon as practical report suspected child abuse to police or child welfare authorities when they become aware of it. Failure to do so is a misdemeanor.

In the case of Fr. Castillo:

“There was obviously a delay in reporting, but whether it was hours, days, weeks, or months, is not entirely clear. We implore you to use your prosecutorial powers to not only investigate the very serious allegations against Fr. Castillo, but also to determine how long the Diocese of Oakland delayed reporting those allegations to law enforcement. The priest may well be a threat to the children, and any cover up by the Diocese endangered boys and girls in Alameda County.”

According to the Mercury News, Oakland diocese spokeswoman Osman said that after Castillo was appointed director of the Department of Faith Formation and Evangelization in October 2017, “As director of the department, Castillo no longer had a parish assignment, nor day-to-day interactions with children.”

That is simply not true.

A parishioner at St. Joseph the Worker in Berkeley, CA, points out in comments on California Catholic Daily on February 2 and March 5, 2019:

“What the news reports on Alex Castillo don’t say is that he was a confessor and regular celebrant of Masses (especially the 11:30A Spanish-language Mass) at St. Joseph the Worker in Berkeley, for several years, but the parish’s Sunday Bulletins indicate the parishioners there are not told of Castillo being accused of pedophilia.”

Although on February 2, 2019, the parishioner could still access St. Joseph the Worker’s bulletin of December 6, 2018 (http://www.stjosephtheworkerchurch.org/Downloads/Bulletin12-06-18.pdf), that bulletin is no longer available. Click here to see for yourself.

However, the parishioner has hard copies of the bulletins of August 13, 2017 and July 22, 2018, which show Fr. Alex Castillo as the celebrant of the 11:30 am Spanish-language Mass, before and after which he could have interacted with children.