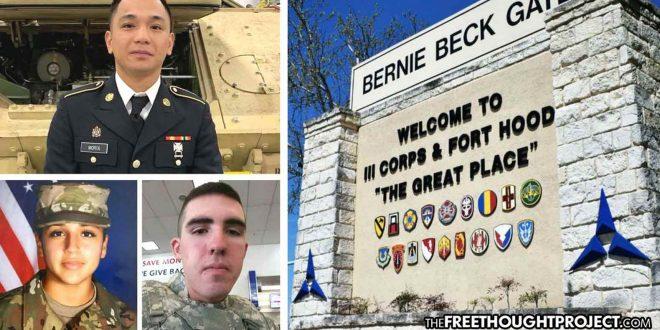 The mysterious death of Vanessa Guillen, a 20-year-old soldier who was brutally murdered at the Fort Hood Army Base in Kileen, Texas, has brought national attention to what appears to be one of the most dangerous military bases in the country. This week, another missing soldier’s body was found 15 miles outside of the military base, making it the third body found in just the last month.

The remains that were found this week have been identified as 26-year-old Mejhor Morta, a soldier from Florida who just joined the army last year as a mechanic. Officials with the base have released very few details about the case, and have not said whether or not they suspect foul play.

Countless people have taken to social media after the discovery of Morta’s body and have called for the closing of Fort Hood. For a brief moment on Wednesday, “close fort hood” was trending on Twitter.

The first missing soldier to be reported by the national media was found dead near the base on June 21st. The remains were identified as 24-year-old soldier Gregory Morales, who had been missing for months. His death was not even being investigated, as officials with the Army believed that he deserted the base, but now they do suspect that he was murdered.

Then on July 1st, the body of 20-year-old Vanessa Guillen was found near the base. A suspect in that case, Fort Hood soldier Aaron Robinson, shot and killed himself as police moved in to arrest him.

A woman that officials identified as Robinson’s girlfriend was arrested and has pleaded not guilty to federal charges of tampering with evidence after admitting that she helped Robinson bury the body.

Guillen had reportedly complained to her family about sexual harassment that she experienced on the base just before her death, and she was said to be filing a complaint against multiple men at the base, including Robinson. Guillen’s family has urged military recruits to reconsidering joining the military and has called on Congress to open a formal investigation into the base.

If we go back a few more months, there are even more bodies. Pfc. Brandon Rosecrans, 27, was found dead from a gunshot wound near his burning Jeep on May 18. Spc. Freddy Delacruz Jr., 23, was among three victims found dead of gunshot wounds at an off-base apartment complex on March 14. Spc. Christopher Sawyer, 29, was found unresponsive in his on-post residence on March 9. Spc. Shelby Jones, 20, was shot and killed at a strip club near Fort Hood on March 1.

This particular base does have a terrible reputation, despite being the largest active-duty armored post comprised of nearly 400,000 soldiers, civilian employees, and their families. According to a 2018 RAND study, Fort Hood had the highest number of reported sexual assaults and rapes of any US military facility worldwide, based on data from 2014.

The base has been known to foster a wide variety of violent crimes including, aggravated assault, child pornography, kidnapping, homicide, rape, attempted rapes, and robbery, according to an article Fort Hood Herald which suggested that the crime rate at the base is lower than many cities. The base has also been the site of multiple shootings, in which the perpetrator was an enlisted soldier.

As of right now, there has been no indication that the deaths of Morta, Morales, and Guillen are connected. However, even if all of these soldiers were killed in unrelated incidents, each case does at least have the common thread of a dangerous military base with incompetent and unconcerned leadership.

The murder is currently being investigated by the Bell County Sheriff’s Department. They are asking anyone with any information on the case to contact, Bob Reinhard, the Bell Country public information officer, at (254) 933-5530.

John Vibes is an author and researcher who organizes a number of large events including the Free Your Mind Conference. He also has a publishing company where he offers a censorship free platform for both fiction and non-fiction writers. You can contact him and stay connected to his work at his Facebook page. John just won a 3-year-long battle with cancer, and will be working to help others through his experience, if you wish to contribute to his treatments consider subscribing to his podcast to support.
h/t TWS