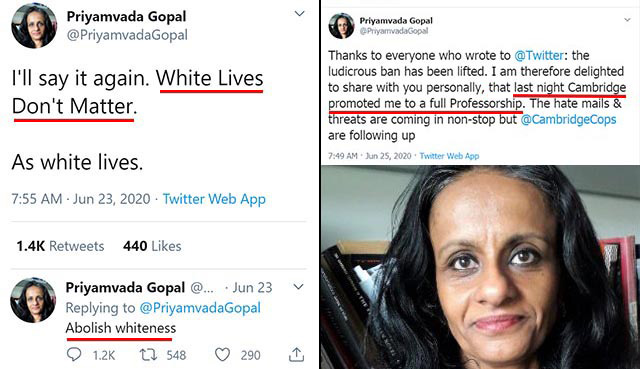 Cambridge University academic Priyamvada Gopal revealed Thursday that she was promoted to a full professorship after receiving backlash for stating that “White Lives Don’t Matter.”

Gopal this morning announced on Twitter that she’s “delighted” to reveal that “last night Cambridge promoted me to a full Professorship.”

Thanks to everyone who wrote to @Twitter: the ludicrous ban has been lifted. I am therefore delighted to share with you personally, that last night Cambridge promoted me to a full Professorship. The hate mails & threats are coming in non-stop but @CambridgeCops are following up

Not surprisingly, Gopal received a lot of pushback and a Change.org petition was signed by over 19,000 people demanding she be fired.

Nonetheless, Cambridge responded with a statement defending their academics’ “right” to express their “lawful opinions” which others “might find controversial.”

The University defends the right of its academics to express their own lawful opinions which others might find controversial and deplores in the strongest terms abuse and personal attacks. These attacks are totally unacceptable and must cease.

Social scientist Noah Carl, a postdoctoral researcher at the University of Cambridge, was sacked on Tuesday night and stripped of his fellowship for conducting research deemed "problematic" and "racist." https://t.co/i2hJCYk83R

Gopal’s treatment also stands in stark contrast with that of Jake Hepple, who on Monday flew a “White Lives Matter” banner over a soccer match in the UK with no apologies.

‘I’d like to take this time to apologise… to absolutely f***ing nobody!https://t.co/7GsNgm4dW1

Hepple and his girlfriend were both fired from their jobs and two GoFundMe campaigns set up to help them were shut down for “racism.”

The girlfriend of the man who flew a “white lives matter” banner over a football match in the UK has been fired from her job after refusing to take “intensive racial sensitivity training.”https://t.co/RgduYSqQ7K

Is this what they call “systemic racism”?