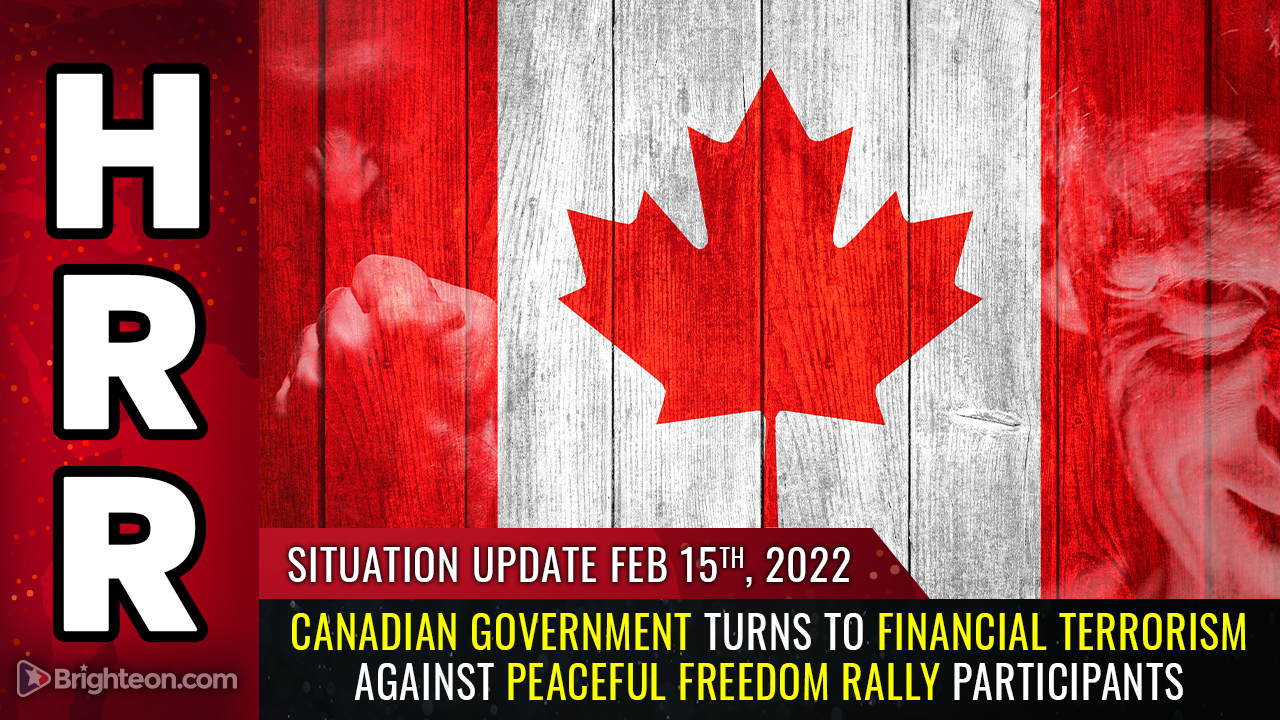 (Natural News) All governments eventually resort to terrorism against their own citizens when they don’t get the compliance they want. It is a universal rule repeated thousands of times throughout history. And now, as the freedom convoy participants in Canada are achieving real traction against the tyranny of Justin “Castro” Trudeau’s regime, that same regime has decided to engage in blatant acts of financial terrorism against Canadian citizens in order to try to destroy them.

Under Trudeau, Finance Minister and WEF governor Chrystia Freeland has announced that Canada will direct banks to steal all the money out of the accounts of protest participants and make their lives a kind of financial hell, all without any due process or the rule of law. No warrants are required, and no proof of any wrongdoing, either. It is full-blown financial terrorism carried out by the government itself.

Her exact announcement was:

“[we will be] broadening the scope of Canada’s anti-money laundering and terrorist financing rules so that they cover crowdfunding platforms and the payment service providers they use. These changes cover all forms of transactions, including digital assets such as crypto currencies…”

In other words, the Canadian government just declared they will seize all donations to any group they don’t like. And they’re even going to attempt to go after cryptocurrencies as well. Thankfully, the decentralized nature of crypto will make that effort extremely difficult — if not impossible — for the criminal government of Canada to successfully carry out.

TD Bank has already seized around $1.4 million in funds that were donated to the Freedom Convoy, proving that financial institutions will gladly go along with government-sponsored terrorism, theft and fraud whenever they feel like it. As The New American reports:

The Toronto-based financial institution has said it is acting on a Thursday order from the Ontario Superior Court of Justice banning the disbursement of funds connected to the Freedom Convoy to its rightful recipients.

Meanwhile, a second crowdfunding source, the Christian company GiveSendGo, has already confirmed that it has no problem flouting what it considers an unjust Canadian court order, tweeting on February 10: “Know this! Canada has absolutely ZERO jurisdiction over how we manage our funds here at GiveSendGo. All funds for EVERY campaign on GiveSendGo flow directly to the recipients of those campaigns, not least of which is The Freedom Convoy campaign.”

As I’ve pointed out in a short podcast (to be posted here soon), this entire fiasco reveals the perfect use case for Bitcoin and other cryptocurrencies — evading the financial terrorism and criminal theft of governments. The decentralized nature of cryptocurrencies makes it extremely difficult for criminal governments to steal peoples’ money… and that’s precisely the point.

What Canada, Trudeau and TD Bank are demonstrating here for the entire world to see is that we can’t trust the financial institutions anymore, since they will collude with criminal governments to steal money from innocent people.

In other words, the entire covid “plandemic” caused people to lose all faith in Big Pharma, government regulators, science journals and the media. Now, through these acts of financial terrorism, Canada and TD Bank are giving people 1.4 million new reasons to abandon any remaining faith in mainstream financial institutions.

It couldn’t happen at a better time, of course, since Canada, the USA and other nations are printing their own fiat currencies into financial oblivion. Anyone clueless enough to keep their money in mainstream banks should expect to experience a total wipeout of all their fiat assets before long. The only true safe havens from all this are gold, silver, land and other hard assets that can’t vanish. Crypto has a role due to its portability and transaction speed, but it’s also subject to digital money printing which is inflating values across the crypto landscape. But that’s another story for another day.

Despite crypto’s risks and problems, it is the perfect solution to funding peaceful protesters and avoiding government financial terrorism.

As reported by RebelNews.com, the Canadian Civil Liberties Association condemns Trudeau government’s use of Emergencies Act:

Earlier today, Justin Trudeau and his cohorts in the federal government invoked the Emergencies Act, effectively curtailing freedoms for Canadians that comes with the ability for banks and other financial institutions to freeze personal and corporate funds without a court order, the targeting of cryptocurrencies, and many other restrictions.

Some of the measures are permanent.

In a series of posts on Twitter, the CCLA declared that Trudeau and his government failed to meet the necessary requirements to invoke the Emergencies Act, which has never been invoked prior.

“The federal government has not met the threshold necessary to invoke the Emergencies Act. This law creates a high and clear standard for good reason: the Act allows government to bypass ordinary democratic processes. This standard has not been met,” the CCLA wrote.

“The Emergencies Act can only be invoked when a situation ‘seriously threatens the ability of the Government of Canada to preserve the sovereignty, security and territorial integrity of Canada’ [and] when the situation ‘cannot be effectively dealt with under any other law of Canada,’” the civil rights organization continued.

Welcome to the dictatorship of Canada

In effect, the Trudeau regime has just declared itself to be a dictatorship, under which Canadian citizens have no real rights, no due process, no civil liberties and no democracy whatsoever. Isn’t it interesting how quickly Canada’s tyrants resorted to revoking the rule of law when they couldn’t get their way?

The Emergencies Act is supposed to be reserved for serious, nation-threatening events such as a foreign power invading the country or little green aliens landing in Ottawa. Instead, the Trudeau regime is so pathetic and clueless, they have invoked it because they don’t like where truckers have parked their trucks.

But the truth is, the Canadian government has no power if the people withdraw their consent. Just because Trudeau “invokes” the Emergencies Act doesn’t magically give him the power to destroy peoples lives and act as a government-sponsored financial terrorist. There is no power in government when the people unilaterally decide they will not recognize that government as legitimate. We the People can simply refuse to play along with their fraud.

Trudeau is a criminal tyrant, and in the USA, Joe Biden is an imposter who was ushered into the fake (staged) Oval Office following a rigged (stolen) election. Both Trudeau and Biden are fakers, and they are both guilty of crimes against the people, against freedom and against humanity.

Humanity is rising up against global tyranny and medical murder

What we are witnessing right now is humanity rising up against global tyranny. The governments of the world tried to mass murder the people with bioweapons and vaccines, and the people have caught on to the scam. They’ve had enough, and now the process begins of criminally prosecuting these government tyrants and sending them to prison for their rest of their pathetic lives.

Hold your ground, fellow human beings. We are standing up for the future of human civilization against a global cabal of demonic mass murderers who are in the process of escalating their government terrorism, government coercion and (ultimately) government violence against the people.

Because, as I said, all governments eventually become terrorists. They all eventually turn to genocide — also known as “democide.”

Why do you think they’ve been building covid concentration camps in Canada, Australia, New Zealand and the USA? They built them because they plan to use them. And they will use them to imprison and mass murder their political opponents. This has been their plan all along.

When all their censorship, threats, financial terrorism and false flag attacks fail, they will simply attempt to come to your door and kidnap you, throw you into a covid death camp and exterminate you. We are very close to that moment right now, and all the death camps are in place for precisely this scenario.

Learn more in today’s hard-hitting Situation Update, which also hilariously features myself belting out a few lines from Barry Manilow songs, which were used by New Zealand police to try to intimidate peaceful protesters there. The effort failed. And by the way, Barry Manilow has been maligned for decades by the same media and music industry that pushes demonic, perverted, filthy messages to children and teens. I’m thinking the world owes an apology to Barry Manilow as he is one of the true “clean” musicians and singers who never resorted to filth to try to boost his album sales.

Hear all that and much more in today’s podcast, if you dare: