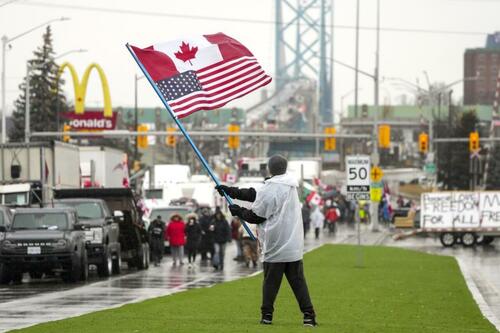 A city bus and school bus arrived at the scene Saturday morning and police moved in formation toward them. But the protesters remained defiant.

Windsor police immediately warned that anyone blocking the streets could be subject to arrest and their vehicles could be seized.

The news was met earlier with defiance by protesters.

At the Ambassador Bridge, an unidentified person grabbed a microphone and addressed the crowd, asking if they wanted to stay or leave when the deadline rolled around. By a show of applause, it was agreed they would stay. “OK,” the man said. “Let’s stand tall.” The protesters responded by singing the Canadian national anthem.

Using a megaphone, one of the protesters alerted the others that police were coming for the demonstrators. Video of the situation quickly made its way online courtesy of @JackPosobiec.

Meanwhile, the police tweeted the following message: “The Windsor Police & its policing partners have commenced enforcement at and near the Ambassador Bridge. We urge all demonstrators to act lawfully & peacefully. Commuters are still being asked to avoid the areas affected by the demonstrations at this time.”

The Windsor Police & its policing partners have commenced enforcement at and near the Ambassador Bridge. We urge all demonstrators to act lawfully & peacefully. Commuters are still being asked to avoid the areas affected by the demonstrations at this time.

A judge on Friday ordered the protesters to clear the bridge, but an injunction issued b Chief Justice Geoffrey Morawetz of the Ontario Superior Court gave them until 1900ET on Friday to clear out. But the deadline came and went without any movement by the protesters.

On Friday, Ontario Premier Doug Ford declared a state of emergency in the province that will allow his cabinet to impose $100,000 fines and up to one year in jail as punishments against anybody blocking roads, bridges or other infrastructure.

As we have pointed out before, the “Freedom Convoy” protests in Canada have spread to three distinct border areas.

After initially being blocked by the police, reporters with Rebel News have managed to get through and join MSM reporters in covering the showdown between the protesters and the police.

Police descend upon blockade at the ambassador bridge at the Windsor, Ontario border crossing.https://t.co/ys9Wa4SGV5 for more. pic.twitter.com/IlUarCOm8B

As a reminder, Canada sends 75% of its exports to the US, and the bridge usually handles 8,000 trucks a day, representing a quarter of all cross-border trade, or about C$500 million ($392.56 million) per day. About C$100 million worth of auto parts cross the border each day, according to Reuters.

But trade isn’t the only factor: PM Trudeau has ulterior motives for wanting to crush the protesters and keep his mandates in place.

This isn't a fight he'll give up easily.

Despite the fact that Canadians are already among the most heavily vaxxed people on Earth.