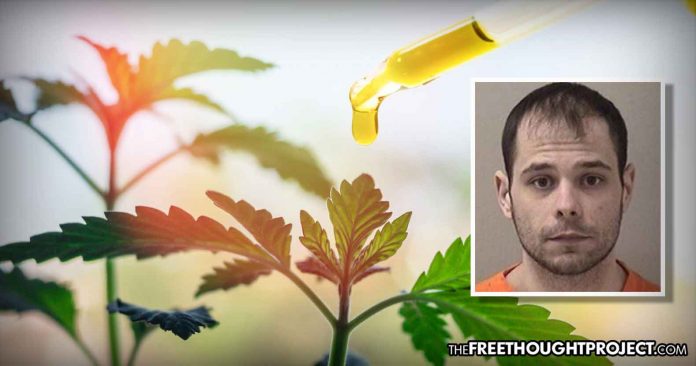 Chicago, IL — Thomas J. Franzen, 37, has never been arrested or committed a crime before he was diagnosed with stage three testicular cancer that has spread to both his lungs and abdominal cavity last year. However, because government claims the authority to throw people in jail over a plant, Franzen’s self-medication process for his cancer has now landed him in prison—for the next four years.

Last month, Franzen was forced to plead guilty in Kane County Circuit Court to possession of more than 5,000 grams (176 ounces) of cannabis, a felony that carried a prison term from 12 to 60 years. He ordered THC-infused chocolates from California to treat his cancer and he will now be put in a cage for it.

Because Franzen ordered such a large amount of the chocolates from California, police accused him of trafficking it, so prosecutors — who had to take this “dangerous drug dealer” of the streets — followed through with the case.

Luckily for Franzen, however, at least one of the prosecutors showed him some compassion for his cancer and they knocked the distribution charges down to possession.

“He’s very relieved to have the case over,” Franzen’s attorney David Camic said. “The judge was cognizant of his health and wanted to give him a break, but ultimately 40 pounds of cannabis is a large amount.”

Sadly, Franzen will now be thrown in a cage as he continues to battle cancer, and he will not have the added help of the cannabis.

“In recognition of the seriousness of Mr. Franzen’s medical condition, our office reduced a 12-year mandatory minimum sentence to 4 years, of which he is required to serve only 2 years,” Kane County State’s Attorney Joe McMahon said in the statement. “We did this in spite of evidence that proves that Mr. Franzen is a drug dealer.”

On June 14, Franzen will be locked in a cage — despite never causing harm to anyone, and despite the fact that Illinois just passed a bill last month that legalizes the possession and commercial sale of marijuana in the state. That bill is awaiting Governor JB Pritzker’s signature.

Now this judge: This is outrageous!! Stage 4 Cancer patient who ordered 42 pounds of THC chocolates gets 4 years in prison https://t.co/OsorDzuhPi

Franzen’s case is especially egregious considering the fact that cannabis has been documented to kill cancer cells. The government is going to lock him in a cage for quite literally saving his own life with a plant.

As TFTP has reported, in April 2015 the National Institute of Drug Abuse acknowledged that cannabis kills cancer cells and dramatically reduces the growth of new brain cancer cells. This was a startling admission, considering that federal government’s position on cannabis retains it as a Schedule 1 drug with “no medical benefit.”

Research has continued despite this roadblock, and now the pharmaceutical industry even admits it.

British company GW Pharmaceuticals has been testing cannabis extracts for the past few years, and now has clinical evidence that certain formulations reduce the mortality rate of people with glioblastoma multiforme (GBM), a form of brain cancer that typically kills patients within two years.

Prior studies had shown that a CBD-THC combination “led to a synergistic reduction in the viability of U87MG glioma cells,” and the “co-administration of temozolomide with THC and CBD had further synergistic effects, causing a significant reduction in cell viability.”

In their press release, GW noted that there is substantial oncologic research on cannabinoids to treat several forms of cancer, with 15 publications on the positive effects on tumor growth and suppression – especially in promoting autophagy, or “the process of regulated self-degradation by cells.”

“We believe that the signals of efficacy demonstrated in this study further reinforce the potential role of cannabinoids in the field of oncology and provide GW with the prospect of a new and distinct cannabinoid product candidate in the treatment of glioma,” said CEO Justin Gover.

Science be damned, however, when it comes to the state.