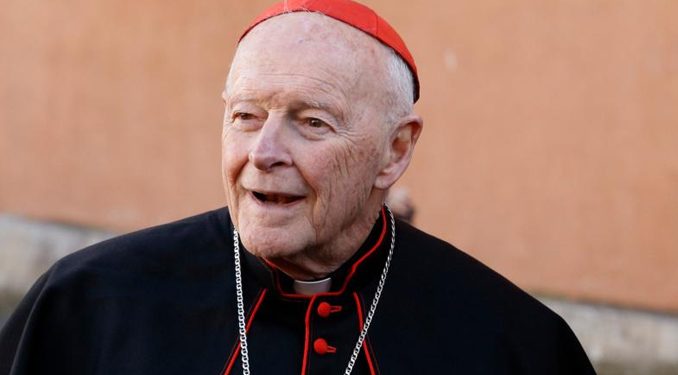 Mark Taylor, the Florida fireman who predicted the presidency of Donald John Trump on April 28, 2011, wrote in “All Roads Lead to Rome,” January 25, 2018:

The Spirit of God says, “The Pope and the Vatican…are not furthering my kingdom but are aiding the kingdom of darkness…. This will be the last Pope, for what I the Lord God am about to do. I will expose this Pope and all those under his command for all the corruption he and the Vatican have been involved in for centuries…. This Pope, the Vatican and all its leadership, will come crumbling down. I will pull back the veil to show how deep and dark the deception has been. You whisper in your inner chambers ‘we answer to no one. No one is above us; No one can hold us accountable.’ I the Lord God see it all and the time has come when I will now hold you accountable for your darkness. This exposure will be of such magnitude that the people will say. ‘What do we do now? Where do we go now? We want nothing to do with this. We have no religion now.’ Millions will walk away from their religion, as this will affect other religions as well.”

“The church is facing a crisis that it hasn’t faced perhaps since the Middle Ages,” said Joan Mann Thomas, chair of the parish council at St. Anselm Parish in Ross, California.

Thomas was not exaggerating.

On July 28, 2018, after shielding Cardinal McCarrick, Pope Francis “accepted” the former Archbishop of Washington, DC’s offer to resign from the College of Cardinals, and ordered the cardinal’s suspension from the exercise of any public ministry, pending “accusations made against him are examined in a regular canonical trial.”

Although McCarrick’s pedophilia had been known for some time, Pope Francis covered up for McCarrick, ignored the sanctions that Pope Benedict XVI had imposed on McCarrick, and even made McCarrick a trusted counselor in U.S. clerical appointments, including the promotion of far-Left bishops such as Blase Cupich of Chicago and Joseph Tobin of Newark to the College of Cardinals. (The Remnant)

Despite McCarrick’s well-known reputation of groping and “sleeping with” seminarians, the Vatican promoted him to the cardinalate and to archbishop of Washington, DC, in 2001.

Two other cardinals have also be accused of sexual misconduct: Australian Cardinal George Pell, one of Pope Francis’ closest advisers; and Scottish Cardinal Keith O’Brien, who is accused by former seminarians in 2013 of sexual misconduct. Two years after the first revelations came out, Francis accepted O’Brien’s resignation after the Vatican’s top abuse prosecutor conducted a full investigation.

(2) PENNSYLVANIA PEDOPHILE PRIESTS AND THE BISHOPS WHO ENABLED THEM

In 2016, Pennsylvania’s 40th Statewide Grand Jury began an investigation into allegations of child sex crimes by Catholic priests across the dioceses of Harrisburg, Allentown, Pittsburgh, Erie, Scranton and Greensburg. The six dioceses account for 54 of Pennsylvania’s 67 counties.

In June 2018, the Pennsylvania Supreme Court ruled that large portions of the grand jury’s report would be released to the public. But about two dozen current and former clergy named in the report succeeded in blocking its release, claiming it would violate their rights to due process and reputation. On July 27, Pa. Chief Justice Thomas Saylor ordered an interim report be released, with identifying information about those clergy petitioners redacted. (Penn Live)

On August 14, 2018, the 1,356-page, redacted version of the long-awaited grand jury report was released. You can read the report here. Below is a summary of the grand jury’s findings:

Every diocese adopted the same strategy on pedophile priests:

Although, because of the church’s coverup, almost every instance of abuse the grand jury found is too old to be prosecuted and many of the priests are dead, “presentments” — written notices that a crime occurred — have been issued against two priests in the Greensburg and Erie dioceses, respectively, who sexually assaulted children within the last decade. There may be more indictments in the future because the grand jury is continuing its investigation.

LifeSiteNews reports, July 23, 2018, that a newly ordained priest, Fr. Fabian Ploneczka, 33, of the Rottenburg-Stuttgart diocese, celebrated his first Mass on Sunday at his home church of St. Moritz in Augsburg, featuring a homoerotic dance.

According to the Augsburger Allgemeine, the worship service included the premiere of a ballet entitled “Jeremiah: Passion of the Prophet”, featuring ballet dancer Clemens Fröhlich of Munich and a narrated libretto written by Ploneczka himself. Observers said the dancer performed dressed only in tight, skin-colored underpants.

The whole church became a dance floor, even the altar area. There the dancer took the Gospel in his hand, stepped almost naked to the ambo, and lolled suggestively in front of the altar.