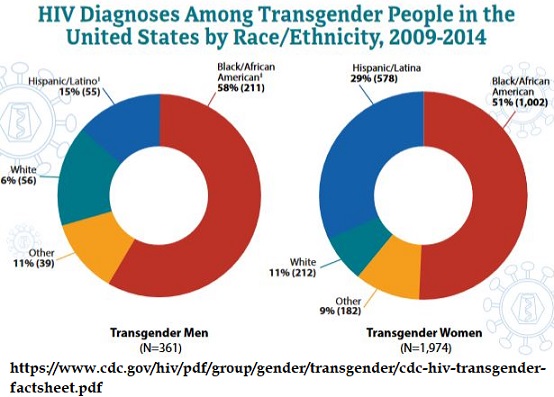 According to the latest CDC publication, an April 2019 fact-sheet on “HIV and Transgender People“:

A recent study by a team of four CDC scientists reinforces and confirms the CDC fact sheet.

The scientists published their findings in “Estimating the Prevalence of HIV and Sexual Behaviors Among the US Transgender Population: A Systematic Review and Meta-Analysis, 2006-2017,” American Journal of Public Health, Nov. 29, 2018. Below is the Abstract of the article:

Transgender women (transwomen) in the United States have been shown to have high HIV risk with Black and Hispanic transwomen being particularly vulnerable. Growing research on transgender men (transmen) also shows increased HIV risk and burden, although not as much is known for this transgender population. […]