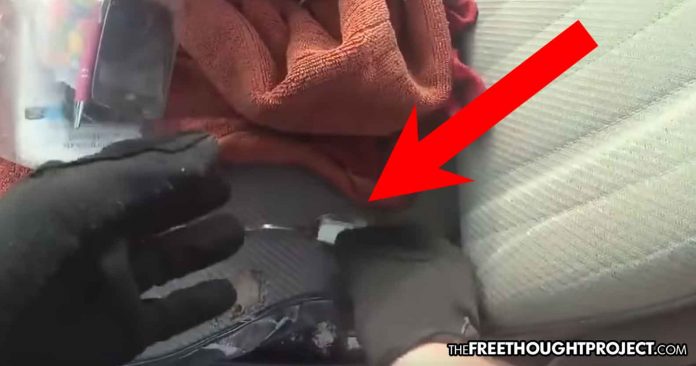 Jackson County, FL — Dozens of innocent people who were rotting in jail have been freed and their charges erased after the corrupt cop who put them there was caught on his own body camera planting meth on an innocent mother. Jackson County Sheriff’s Deputy Zachary Wester has since been fired and a slew of lawsuits are now rolling in.

Wester’s fall from law enforcement grace and the 119 people who were exonerated are due largely in part to the diligence of a single person, assistant state attorney at the 14th Judicial Circuit, Christina Pumphrey.

Pumphrey’s job as assistant state attorney included reviewing evidence before moving forward with charges against individuals. When she began reviewing cases, she found something very peculiar.

“This is an exaggeration, but it felt like his (Wester’s) name was on half the cases,” Pumphrey told The Appeal. “It was seriously disproportionate.”

When Pumphrey began watching the body camera footage from Wester’s arrests, she found something even more disturbing. Many times, Wester was seen conducting illegal searches. Also, his written affidavits did not match what she watched in the videos. But that wasn’t the most telling aspect of all these videos.

While it is no question that folks will claim that drugs found on them or in their possession “aren’t their’s” and “they don’t know how that got there,” nearly all of Wester’s cases had this. The videos showed that people were utterly shocked when Wester claimed to have found drugs in their vehicles. While a single person may have been lying, when everyone reacts the exact same way, something is up.

Although she reviewed multiple videos, Pumphrey never saw the actual act of Wester planting drugs or otherwise hiding them. However, all that changed when Wester pulled over Teresa Odom in February of 2018.

In that video, Wester pulls Odom over, claiming her tail lights aren’t working. However, it would later be revealed that her tail lights were, in fact, working fine and Wester had targeted her to frame her.

In the video, Wester is extremely nice to the woman, complimenting her, joking around, and making small talk. But in the back of his mind, he knew the entire time that he was going to plant meth on her and have her thrown in a cage—an insidious move indeed.

After threatening to have a K-9 come search her car, Wester tells Odom that she can avoid the K-9 if she just lets him search her truck himself—a huge mistake.

As the body camera shows, Wester opens the door to Odom’s truck and is cupping a small baggie with a white powder in it.

Wester would plant the substance under a red towel in her truck and then pretend to find it later. Odom would then be arrested and thrown in a cage so this officer could make himself look like a hero.

After Pumphrey began to raise red flags in her department pointing out videos like Odom’s, she says the system began to go after her.

As The Appeal reports:

Internally, however, Pumphrey said the chief assistant state attorney, Larry Basford, chastised her for sharing the videos with the sheriff’s office. “He starts yelling over the phone. What was I doing looking through all the videos? Why in the world did I find the Teresa Odom video? Why was I looking for it? And just having an absolute fit.” Basford did not respond to comment on Pumphrey’s characterization of this conversation. Pumphrey turned in her resignation the following day. She filed a whistleblower complaint, but later dropped it because she said she didn’t want it to affect her ability to represent her clients at her new state job in public defense at the Office of Criminal Conflict and Civil Regional Counsel for the First DCA Region of Florida.

Apparently, it wasn’t just Wester who had an interest in locking up innocent people.

“The state attorney’s office was just as bad and just as guilty as Zach Wester when we found this out and were not dropping these cases immediately, in my mind,” Pumphrey said. “When it was ignorance it was one thing, but as soon as we know there are innocent people sitting in jail and we don’t drop the charges, we’re as guilty as he is.”

Although Wester was fired after Pumphrey exposed him, the state has yet to bring any charges against him, claiming they are still looking into it.

Also, although these 119 people were vindicated, and a possible 30 more could be, they still face challenges from being framed.

“People still had consequences. It wasn’t like this was just all erased,” Pumphrey said. Dropped charges still remain on a person’s criminal record. And “even though the charges got dropped, there were people sitting in jail for six months on no bond because of this case. Or you’ve got people who have to spend money on supervision fees; they have to spend money paying for their own urine analysis test; they’ve done community service hours; they paid cost of bond — like $1,500. … You’re not getting back six months of your life. Or you’re not getting back the job that you lost because you sat in jail for a week before your girlfriend could get the bond money.”

The next time someone tells you that obeying the law will keep you out of trouble with police, show them this article. A single cop had over 100 victims.