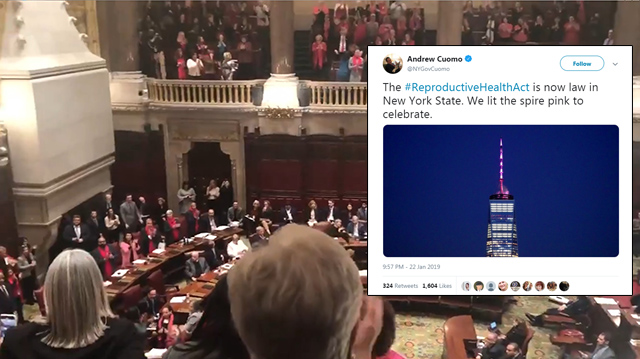 The State of New York has effectively legalized abortions up to birth and leftists and Governor Andrew Cuomo are absolutely giddy.

Cheers broke out as soon as the bill passed the New York State Senate on Tuesday as this celebratory video from Planned Parenthood shows:

BREAKING: New York State Senate just made HISTORY and passed the Reproductive Health Act on the anniversary of #RoevWade! pic.twitter.com/u2diMzgSQW

The New York Senate passed a radical pro-abortion bill Tuesday that would allow unborn babies to be aborted for basically any reason up to birth.

Metro reports the bill passed after abortion activists pushed it for more than a decade in New York. Until now, it failed to pass the state Senate because of Republican lawmakers, but the November election put pro-abortion Democrats in control of both houses.

A New York Public Radio reporter said she heard a voice shout, “May almighty God have mercy on this state!” in the Senate soon after the vote.

The legislation goes beyond Roe v. Wade, allowing abortions even when the Supreme Court has said states may regulate them, according to the pro-life leaders. Late-term abortions, which currently are illegal in New York, would be allowed, and non-doctors would be allowed to perform them.

The bill appears to restrict late-term abortions, but it adds a broad “health” exception for abortions after 24 weeks. The exception would allow women to abort unborn babies up to nine months of pregnancy for “age, economic, social and emotional factors, rather than the biological definition of ‘health’ that normally comes to mind,” according to New York Right to Life.

Governor Cuomo signed the bill into law just hours later and lit the spire on the Freedom Tower pink to “celebrate.”

The #ReproductiveHealthAct is now law in New York State. We lit the spire pink to celebrate. pic.twitter.com/dJbZqvWefV

I may be old fashioned, but there’s something about celebrating the legalization of baby murder which rubs me the wrong way.