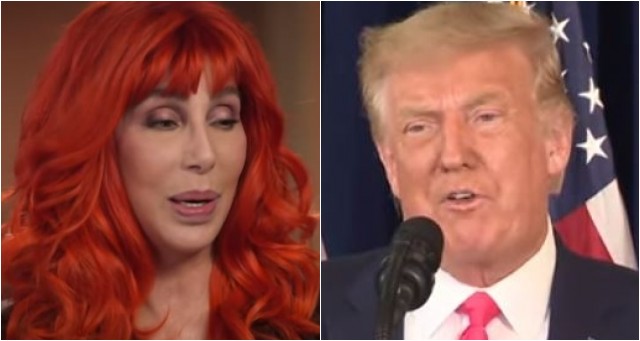 Cher tweeted that it is “THERE’S A NAME 4 KILLING SOMEONE…ITS CALLED “MURDER”. IF YOU MURDER MORE THAN ONE PERSON YOU ARE A MASS MURDERER. THERE ARE MANY PUNISHMENTS FOR DIFFERENT DEGREES OF MURDER, BUT WHEN SOMEONE “KNOWINGLY “MURDERS PEOPLE… THE PUNISHMENT IS DEATH. Trump’s a mass murderer… hhmm” which is apparently a reference to President Trump’s handling of the Chinese coronavirus pandemic. Indeed, the Moonstruck star has made that same connection in the past.

It would be easy to dismiss what these ignorant Hollywood say and do but the issue is that people listen and believe what they say.

More garbage from the washed up lib:

Keep Thinking Why Did Trump Lie😳.I Mean,I Know Why He Lied,BUT WHEN 10’S Of Thousands Of Ppl Started Dying
Why Didn’t His Conscience
Kick In & Say To Him…WAIT🛑NOT ONLY ARE U LETTING 💯💯 OF THOUSANDS OF PEOPLE DIE⚰️ THINK OF THE LOVED ONES👧🏽👶🏻👵🏻👩🏻👨🏽‍🦳WHO WILL BE CRUSHED 4EVER

While Cher deleted the tweet, she continued her rant in another thread, asking, “why did Trump lie” and admitting that she sometimes goes “too far.” She then provided a screenshot of articles on the Treasury Department reportedly siphoning millions from a 9/11 program. Breitbart reported.

SOMETIMES I GO FAR,SOMETIMES TOO FAR
BUT AFTER READING TRUMP WAS KEEPING 💰FROM 911
FIRST RESPONDERS FUND
IT WAS TOO MUCH😤. HAVING SAID THAT, I CANT FALL BELOW MY MORAL COMPASS..
NO MATTER WHAT🙏🏻 pic.twitter.com/Mm1H5APjp0

LETS TALK…. I MUST TRY TO BE A BEACON OF LIGHT FOR YOU.
OBVIOUSLY DIDNT HEAR MY HIGHER ANGELS😥

I Feel Ashamed
SHAME IS IMPORTANT

What is she even talking about? She’s clearly lost her mind.

In these insane times we find ourselves in, especially with these unprecedented attacks on American citizens that believe in our President and the President himself, it is our duty to stand up for what is right and not fear those who wish to destroy our nation.