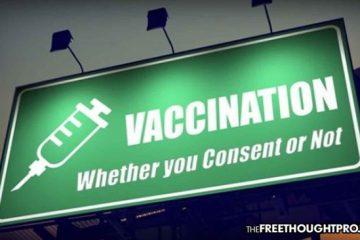 Good for them! The law is on their side! And the city could go practically bankrupt if the 90 school bus drivers who walked out at the end of August, 70 of who quit the same day, end up filing a lawsuit against the city and Chicago Public Schools.

Fox32 Chicago has the story.

Chicago Public Schools said Sunday that 90 bus drivers quit between August 23-27. About 70 of those drivers quit on the same day.

“According to the bus companies, the rush of resignations was likely driven by the vaccination requirements,” the school district said.

Like many districts across the country, CPS had anticipated a shortage of bus drivers before the city announced vaccination requirements. They had planned to work around the shortage by scheduling earlier pickups. But the loss of another 10% of drivers has left 2,100 students without a ride.

The district’s answer? To pay students to find their own way: $1,000 for the first two weeks of school and $500 a month after that.

So, let’s get this straight, CPS mandates what is unlawful, then when drivers quit, they decide to take taxpayer money and give it to students to the tune of $1,000.

TRENDING: Couple Finds Code… 2 Years Later They Find the Safe – See What Was in It (Updated)

To show I’m not that far off with the lawsuit issue, B. N. Frank reminds us, “Last month, an attorney stated that vaccine mandates will eventually lead to a ‘tidal wave of lawsuits’. True that (see 1, 2).”

Remember, you can resist employer shot mandates, as well as students. Check out the forms you need to serve them so that you document how they are violating the law in order to file suit should they continue in their lawlessness.