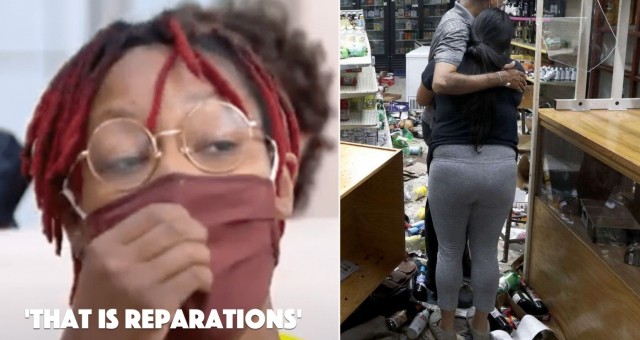 “That is reparations,” a BLM organizer said. “Anything they wanted to take, they can take it because these businesses have insurance”

Black Lives Matter members in Chicago held a rally on Monday to support the more than 100 arrested last night following widespread looting and rioting that caused at least $60 million in property damage and saw 13 police officers injured, according to a report.

The rally was organized by Black Lives Matter Chicago and was held at a police station in the South Loop where organizers say individuals are currently being held in custody. At least one organizer called the looting tantamount to “reparations.”

What did Chicago expect? By tolerating the violent protests and looting it simply enables the mentality to loot at will. This new fear of steeping on toes out of fear of being called “racist” is nothing but a psyop on the American citizens. The violence and looting has 0 to do with racism, it has 0 to do with protecting communities, it has to do with peaceful protests against Police Departments and it has everything to do with criminals with a free pass to steal whatever and wherever they please.

Black Lives Matter Chicago warned Mayor Lori Lightfoot on Monday that the renewed civil unrest that’s gripped the city throughout the summer won’t end until “the safety and well-being of our communities is finally prioritized.”

“The mayor clearly has not learned anything since May, and she would be wise to understand that the people will keep rising up until the [Chicago Police Department] is abolished and our Black communities are fully invested in,” the group said in a statement. Later Monday, about 200 protesters gathered outside a police station in the South Loop to voice their frustrations, Chicago Sun Times reports.

What is the solution to the violence and hate that leads to riots and looting across our nation right now?