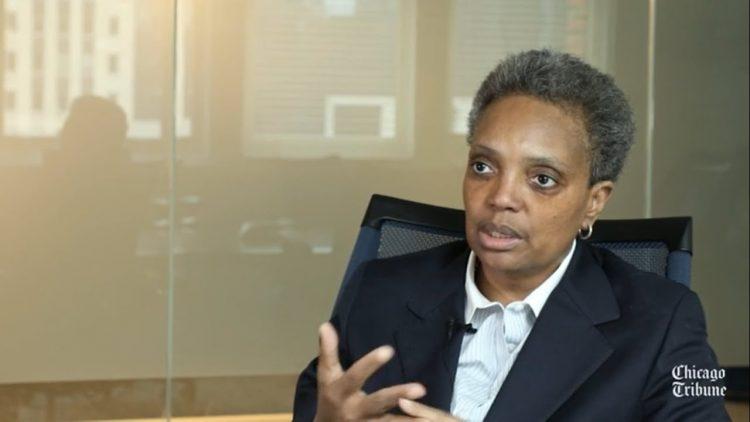 Yes, the new Ministry of Truth, ie. Facebook, Twitter, Google, YouTube and a host of other self-professed fact checkers are at it again. This time they are shutting down a video in which Chicago Mayor Lori Lightfoot pledged support for the New World Order. Facebook and the Associated Press deemed the claim false and claimed the video was edited to make it appear that she said such a thing, but the problem is that it wasn’t edited at all, just clipped from a larger interview.

Here’s the clip of the mayor saying exactly what was claimed.

Paul Joseph Watson has the story at Summit News.

Facebook and Associated Press ‘fact checkers’ claim it’s false that Chicago Mayor Lori Lightfoot said she supported the “New World Order,” saying the video is “edited,” despite the fact that it’s not edited.

A 2019 interview with Lightfoot has resurfaced in which she makes the following statement;

“And you get the people who run those agencies and the deputies that are pledging allegiance to the new world order and good governance.”

The Associated Press, which is used by Facebook as a fact checker, claims the story is “false” and that the video is “edited,” despite the fact that the video is not edited, it is merely a segment from a larger interview.

By using the term “edited,” the AP is suggesting the video is manipulated or doctored, which it isn’t. Since all video is clipped or shortened, you could claim that all video is “edited.”

AP claims the video is taken out of context because “Lightfoot was not planning a global coup, she was talking about ending a long-standing and unusual custom in Chicago called “aldermanic prerogative,” which gave aldermen absolute power on zoning and development decisions in their home wards.”

However, nowhere is it shown that anyone suggested Lightfoot was planning a “global coup.” This seems to be a strawman invented by the AP itself.

These criminals are just covering for someone that can’t control her mouth. Fortunately, people like Paul Joseph Watson and others don’t let them get away with it and we are discrediting the self-professed fact checkers every day.

In fact, we’re in the midst of dealing with Facebook over the lies of their paid propagandist fact checkers and Facebook who censors based on those lies.