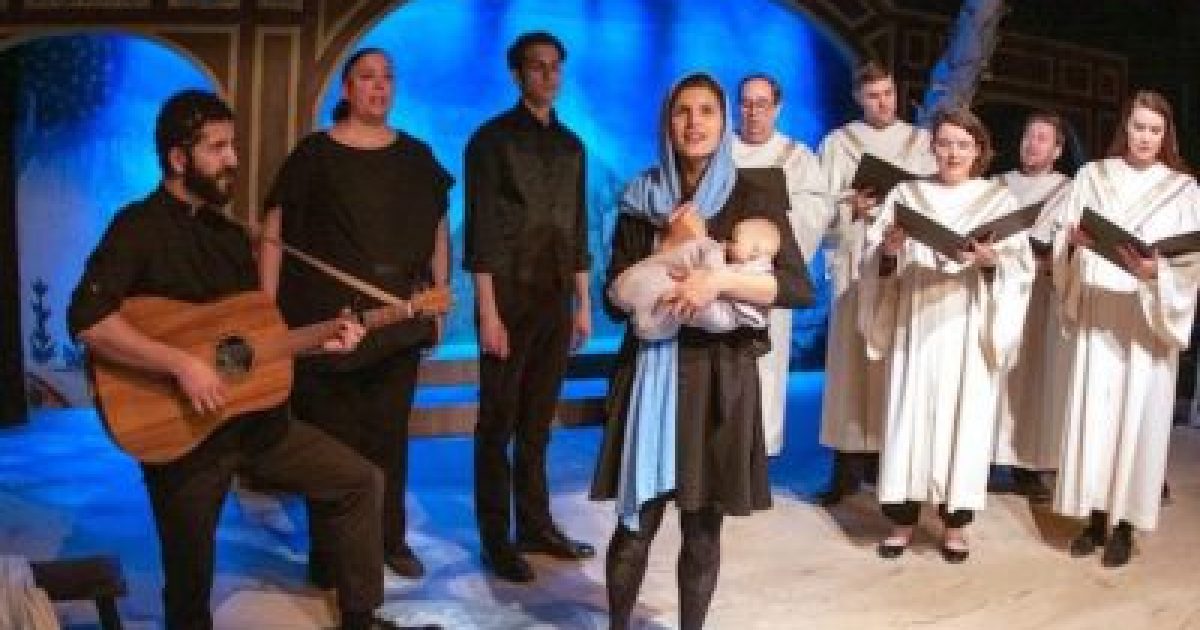 Editor’s Note: As Robert points out, this play does not represent the truth and the fact that a supposed “Chrisitan” theater would allow such an abomination to be promoted inside itself demonstrates that church is a harlot, not the bride of Christ, but this is what she becomes when she fails to be who she is called to be, and her message is no message at all. Indeed, the coming of Christ, His life, death, resurrection and ascension are a demonstration of love to all those He came to save, but to claim it is a demonstration of love for those who continue to hold to the antichrist religion of Islam without true repentance and saving faith in Jesus is simply a lie.

Good news! According to Religion News Service, a theater company in Chicago named Silk Road Rising is producing a new play entitled “Christmas Mubarak,” presenting Qur’anic traditions about the birth of Jesus, “in hopes it will illustrate how much the two religions have in common.” This marvelous play premiered last week in Silk Road Rising’s theater, which is located inside a United Methodist Church.

The play’s director, Corey Pond, explains: “This is a love letter to the Muslims we know and who come, that they’re going to feel like they’re incorporated in the Christmas holiday.”

How wonderful! How broadminded! How ecumenical! In case Corey Pond or anyone else in Silk Road Rising is looking for inspiration for a sequel, here are some Qur’an passages that might be inspiring:

Jesus is not the Son of God and belief in the Trinity is “excess”: “O People of the Book! Do not exaggerate in your religion nor utter anything concerning Allah save the truth. The Messiah, Jesus son of Mary, was only a messenger of Allah, and his word which he conveyed to Mary, and a spirit from him. So believe in Allah and His messengers, and do not say ‘Three.’ Cease! It is better for you! Allah is only One Allah. It is far removed from his transcendent majesty that he should have a son. His is all that is in the heavens and all that is in the earth. And Allah is sufficient as Defender.” — Qur’an 4:171

Jesus was not crucified: “And because of their saying: We killed the Messiah, Jesus son of Mary, Allah’s messenger – they did not kill him or crucify him, but it appeared so to them; and those who disagree concerning it are in doubt about it; they have no knowledge of it except pursuit of a conjecture; they did not kill him for certain.” — Qur’an 4:157

Those who believe in the divinity of Christ are unbelievers: “They have certainly disbelieved who say that Allah is Christ, the son of Mary.” — Qur’an 5:17 (cf. 5:72)

Christians have forgotten part of the divine revelations they received: “From those, too, who call themselves Christians, We did take a covenant, but they forgot a good part of the message that was sent them: so we estranged them, with enmity and hatred between the one and the other, to the day of judgment. And soon will Allah show them what it is they have done.” — Qur’an 5:14

Those who believe that Jesus is God’s Son are accursed: “The Jews call Ezra a son of Allah, and the Christians call Christ the son of Allah. That is a saying from their mouth; they but imitate what the unbelievers of old used to say. Allah’s curse be on them: how they are deluded away from the Truth! ” — Qur’an 9:30

Christians who do not accept Muhammad and the Qur’an are the most vile of created beings: “Nor did those who were given the Scripture become divided until after there had come to them clear evidence. And they were not commanded except to worship Allah, sincere to Him in religion, inclining to truth, and to establish prayer and to give zakah. And that is the correct religion. Indeed, they who disbelieved among the People of the Book and the polytheists will be in the fire of Hell, abiding eternally therein. Those are the most vile of created beings.” — Qur’an 98:6

Muslims must fight against and subjugate Christians: “Fight those who believe not in Allah nor the Last Day, nor hold that forbidden what has been forbidden by Allah and His Messenger, nor acknowledge the religion of Truth, of the People of the Book, until they pay the Jizya with willing submission, and feel themselves subdued.” — Qur’an 9:29

Also, a hadith has Muhammad predicting that Jesus will return at the end of the world and break the cross, as it is an insult to Allah’s power to say that he would have allowed one of his prophets to be crucified:

Narrated Abu Huraira: Allah’s Apostle said, “By Him in Whose Hands my soul is, son of Mary [Jesus] will shortly descend amongst you people [Muslims] as a just ruler and will break the Cross and kill the pig and abolish the Jizya [a tax taken from the non-Muslims, who are in the protection, of the Muslim government]. Then there will be abundance of money and nobody will accept charitable gifts. (Bukhari 3.34.425)

Muslims have sometimes taken this to mean not just that crosses will be destroyed in the end times, but that they should be now. In Spain in 2015, Muslims broke into a church, spray-painted “Allah” on wall, and destroyed the crucifix. In Pakistan in 2014, Muslims destroyed a church that was under construction, and desecrated the cross. When the Islamic State occupied Mosul, it made destruction of all crosses in the city a top priority.

Meanwhile, when is a Muslim theater company going to reciprocate with a play depicting the Christian view of Jesus’ birth?

Once again we see it: these “outreach” efforts are always and in every case one-way. Here, in closing, is my favorite New Testament verse, this time referring to Silk Road Rising: “Leave them; they are blind guides. And if a blind man leads a blind man, both will fall into a pit.” (Matthew 15:14)