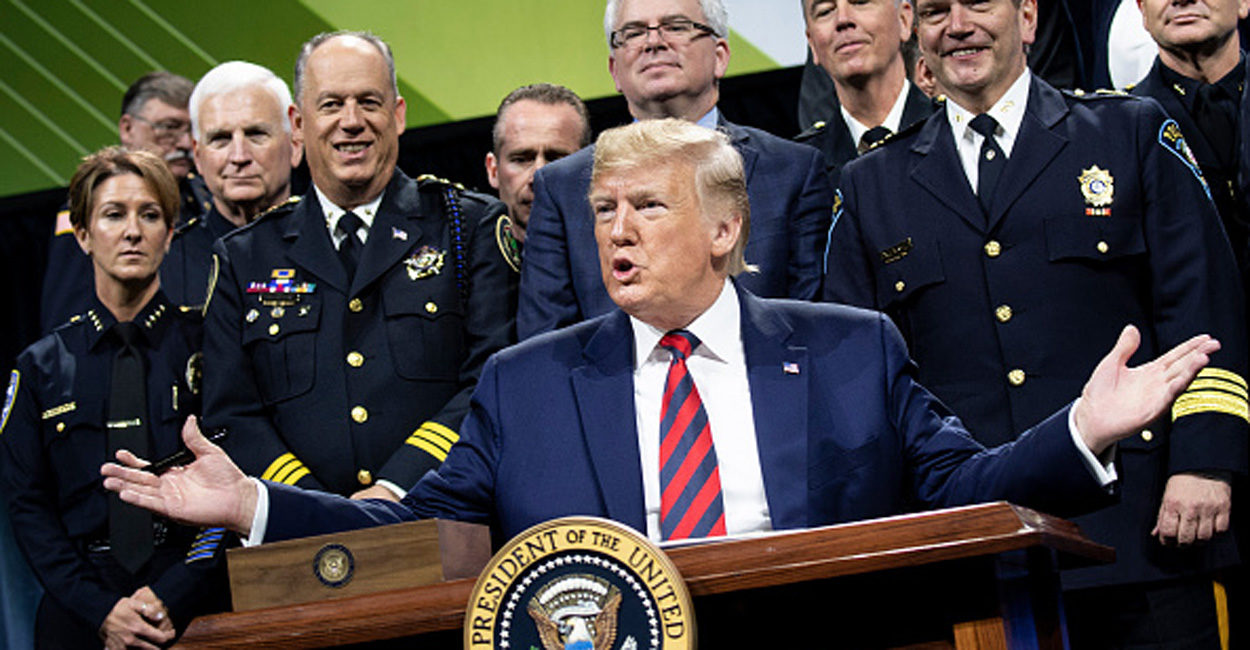 Speaking before a gathering of police chiefs in Chicago, President Donald Trump on Monday sharply criticized the city’s police superintendent, who boycotted his speech, noting the high rates of violent crime there.

“The courageous police officers of Chicago, and I know some of them, and they are the most incredible people, could solve this problem quickly. It’s embarrassing to us as a nation,” Trump told his audience at the International Association of Chiefs of Police annual conference and exposition.

“All over the world, they are talking about Chicago. Afghanistan is a safe place by comparison,” the president said. “Police officers of Chicago are entitled to a police superintendent who has their backs and knows what he’s doing.”

Trump emphasized that he was sympathetic to the residents of Chicago and to the city’s rank-and-file police officers.

He stipulated that he was talking about Chicago’s political leadership and specifically Police Superintendent Eddie Johnson.

“You’re entitled to a police superintendent who sides with you, with the people of Chicago … with the families of Chicago, not the criminals and the gang members that are here illegally, and, not the stupid politicians that don’t know what the hell they are doing,” Trump said in what was his first speech in Chicago as president.

Johnson announced last week that he would attend the conference of police chiefs but skip Trump’s speech.

“While the superintendent is looking forward to leading the International Chiefs of Police conference, and he’s looking forward to participating in discussions about making our communities safer, he will not be attending the speech of the president because the values of the people of Chicago are more important to him than anything the president has to say,” Chicago police spokesman Anthony Guglielmi told the Chicago Tribune.

Trump repeated part of the spokesman’s quote, attributing it directly to Johnson, who has been Chicago’s top cop since April 2016.

The claim to be the best president for police wasn’t just an idle boast, as Trump was introduced as “the strongest supporter of law enforcement that this profession has ever seen,” by the association’s president, Paul Cell, who doubles as chief of the Montclair State University Police Department in New Jersey.

Trump called out Johnson, saying the Chicago police superintendent “should be here, because maybe he could learn something.”

During the first weekend of August 2019, seven people were murdered, and 52 were wounded in 32 shootings in Chicago. Recently, they had had 78 shootings over a weekend spree, and three people killed.

Chicago has the toughest gun laws in the United States. That doesn’t seem to be working too well, does it? A lot of you people know exactly what I mean. Under Johnson’s leadership, they certainly don’t protect people.

Trump later drew applause from his audience of law enforcement leaders when he said, “The best way to reduce gun violence is to put criminals with firearms behind bars. … We will always protect our Second Amendment.”

The president added that “Chicago is, unfortunately, the worst sanctuary city in America.” He noted that in 2018, Cook County, Illinois, refused to hold 1,162 criminal illegal immigrants until federal Immigration and Customs Enforcement agents could take custody of them. Chicago is the county seat of Cook County.

“Eddie Johnson wants to talk about values. No,” Trump said. “People like Johnson put criminals and illegal aliens before the citizens of Chicago, and those are his values. And, frankly, those values, to me, are a disgrace. I will never put the needs of illegal criminals before … the needs of law-abiding citizens.”

In a press conference after the president’s speech, Johnson responded to the criticism.

“The national narrative that Chicago is a city on fire is simply not true,” Johnson said. “We have our challenges on the South and West [Sides]. But I want to remind people that we also have 17 neighborhoods in this city that are safer than Manhattan and L.A.”

Johnson, noting his three decades of experience with the Chicago Police Department, said the Windy City has driven a national reduction in crime.

“We’ve had double-digit reductions in crime in the last three years,” he said. “Now, don’t get me wrong. I understand where we were in 2016. At the same time, we could have easily continued to rise. We didn’t. We blunted that crime, and we are driving it down. Even this year, we are at an 11% reduction. That’s three years in a row of double-digit reductions. I know people don’t understand that, but that’s difficult. That just doesn’t happen.”

Trump also mentioned the recent high-profile case out of Chicago in which actor Jussie Smollett, who is black, alleged that he was the victim of a “hate crime.” The Chicago Police Department determined that the incident was a hoax.

Smollett had said his purported assailants warned him that he was in “MAGA country,” short for “Make America Great Again,” a slogan associated with the president.

“Then you have the case of this wise guy, Jussie Smollett, who beat up himself,” Trump said. “He said ‘MAGA country’ did it. MAGA country. That’s a hate crime. And it’s a scam. It’s a real big scam. Just like the impeachment of your president is a scam.”

Chicago has demanded that the actor—who had co-starred in Fox Broadcasting Co.’s “Empire” series, but was axed after the incident—reimburse the city $130,000 for the cost of investigating the hoax.

After his remarks, Trump signed an executive order establishing the federal Commission on Law Enforcement and the Administration of Justice, the first presidential commission on law enforcement in half a century.