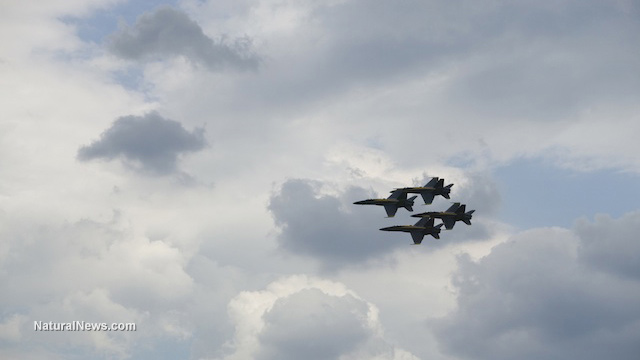 (Natural News) Beijing is sending fighter aircraft and bombers into Taiwan’s airspace in an effort to distract its citizens and placate growing anti-government sentiment, says a recent report by political think tank Gatestone Institute. In an op-ed by senior fellow Gordon Chang, he noted that not even the presence of senior U.S. officials on the island would deter Beijing from issuing threats and violating previous agreements.

The latest incursion occurred Sept. 18, when Beijing sent 18 planes across the line dividing the Taiwan Strait. A second batch of planes — this time, including nuclear-capable H6 bombers — crossed the island’s airspace the next day. It is worth noting that these fly-bys happened while State Undersecretary Keith Krach was on the island to attend a memorial service for former Taiwanese president Lee Teng-hui. The former president is known for leading Taiwan to democracy, which earned him the moniker “godfather of Taiwan secessionism” in the mainland.

A Chinese fighter pilot in the incursion sent a radio transmission justifying the incursions on Taiwanese airspace and denying the existence of the strait’s median line. The pilot also branded Taiwan a “pawn of foreign forces.” China’s Ministry of Foreign Affairs spokesman Wang Wenbin later seconded the pilot’s transmission, saying that “there is no so-called center line in the Taiwan Strait.”

In an editorial, state-run newspaper Global Times said the Sept. 18 aerial patrols were “rehearsals on taking over Taiwan.” It added that the patrols only needed a political reason to become a “real battle to smash Taiwan independence forces.”

It also went on to warn the U.S. and Taiwan to not misjudge the situation and that a full-blown conflict is inevitable if “provocations” are continued.

China military analyst Richard Fisher wrote about Hu’s editorial in a Sept. 21 piece for the Taipei Times. According to Fisher, the editor of the CCP-backed newspaper wanted China to start a war and be able to kill millions of Americans and Taiwanese in the process.

Fisher later told the Gatestone Institute five days later that the “dangerous military exercises” China conducted was a way to “frighten” the U.S. and “terrorize” Taiwan.

A show of military might or a much-needed distraction?

Based on its recent actions, the CCP is testing the waters towards a full-scale conflict with its fly-bys close to Taiwan. Provocative rhetoric published in outlets such as Global Times further fan the flames of war and justify the deaths of millions. However, Chang put forward two possible reasons why China wants to pick a fight with the U.S. and Taiwan. (Related: U.S. has been quietly building up military resources and firepower on a remote Pacific outpost in unmistakable signal to China.)

First, the country needs a victory to make up for its humiliation at the hands of the Indian Army. A standoff between Indian and Chinese forces in the Himalayan territory of Ladakh since May has turned out in favor of the Indian side, as they managed to recover areas formerly under Chinese control. The Indian victories disgraced the Chinese, who were unable to strike back.

Second, Chinese leader Xi Jinping is in an exposed political position. The highest-ranking CCP member has nobody else to blame but himself for any shortcomings, as he gained full accountability alongside unprecedented power when he became the CCP’s general secretary in 2012. With China beset by a number of problems—the coronavirus pandemic, natural disasters, and a stumbling economy—Xi needs a victory to distract senior party leaders and the Chinese people.

The communist Chinese government calls Taiwan “sacred” territory and insists it has sovereignty over the island—which it aims to assert through the aerial incursions. However, the island’s inhabitants consider themselves Taiwanese and not Chinese based on numerous surveys, insisting on their independence over the Chinese mainland.

Read more news about China’s attempts to deflect attention to its internal problems by starting a conflict with Taiwan at Collapse.news.