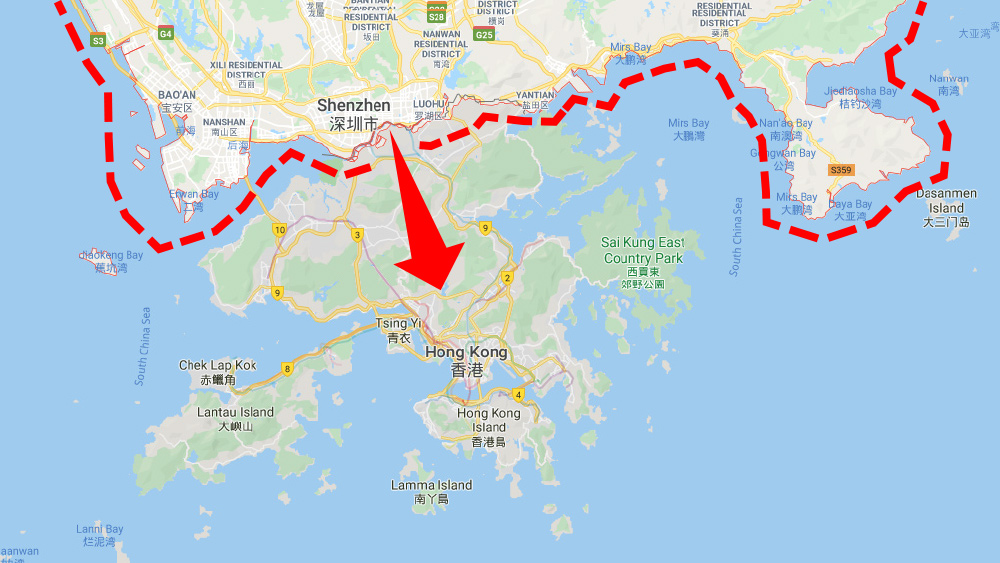 (Natural News) This is a breaking news update from Natural News, translated from the Chinese language Liberty Times Net website, which has produced some of the best reporting on the coronavirus pandemic outbreak.

According to the report, the communist Chinese government has just announced the imminent quarantine of the city of Shenzhen in the Guangdong Province, causing a “mad rush” of Chinese citizens fleeing to Hong Kong to try to escape the quarantines before the international community blocks all flights from Hong Kong. This effort will, of course, only serve to accelerate the spread of the virus internationally.

There are roughly 25 million people in the greater Shenzhen municipal area, so this is a significant increase in the number of Chinese citizens who will soon be living under military-enforced quarantine. (Currently over 50 million, soon to be at least 75 million and growing…)

Here’s the translated text that explains this. Just remember, automated machine translations from Chinese to English are very difficult, so the English appears quite broken:

Shenzhen News Network reported that the Shenzhen Municipal People’s Government said on the 7th, all communities will be 100% closed management, if there are confirmed cases of residential “hard isolation” for 14 days, and organize “regulatory service team” to do key ethnic groups tracking, where there is a history of close contact with the case 100% of the implementation of centralized isolation, households also want to take temperature and other measures.

According to Hong Kong’s “Position News” reported that Shenzhen city from the 8th began to seal the city after the announcement of the news, 7 days from the emergence of a large number of people want to pour into Hong Kong, from the scene film can be seen at 10:28 p.m., shenzhen port before the appearance of long lines of taxis, are to load the people of Shenzhen into Hong Kong, long car long about 1 km.

The same story also reports that the hard quarantine of Shenzhen begins on Feb. 8th (tomorrow), which is why people are panic fleeing today, while they can still get out: (another important reminder to always have a bugout bag)

Comprehensive Chinese media reports, the Shenzhen Municipal Government announced that from February 8 on the city’s people’s vehicles fully implement control, in the “vehicle epidemic control checkpoint” vehicle control, and foreign vehicles to sacrifice “advance declaration measures”, the first time the public driving through the “vehicle epidemic prevention checkpoint”, must be at least 1 day in advance of the Internet registration declaration, approval before passing.

The Wuhan quarantine has been breached… “Hong Kong is finished”

Shenzhen, in Southern China, is very close to Hong Kong. This explains why Shenzhen residents are fleeing to Hong Kong, no doubt bringing more infections with them. Many residents will attempt to take flights out of Hong Kong in order to escape the draconian quarantine, which means of course that some of these people will be inadvertently spreading the coronavirus pandemic to yet more countries, including the United States, which still accepts flights from Hong Kong and China.

According to the Liberty Times Net story, observers in Taiwan are now saying, “Hong Kong is finished” and are demanding that flights from Hong Kong be cut off in order to protect Taiwan and other Asian countries from the exploding pandemic. Some of the quotes in the story include, “”The people of Hong Kong are dead, Taiwan will soon be cut off…” and “next week becomes the crazy influx of Hong Kong people into Taiwan.”

We pray for the people of Hong Kong in this desperate time. They are good people, and they don’t deserve this madness from communist China.

China’s quarantine efforts now accelerating the spread of the pandemic

It brings up an important point in all this. As China is chasing the outbreak with ever-expanding quarantines, the citizens who live in those areas are attempting to flee before the quarantine, causing a mass exodus of infected individuals who would have otherwise probably just stayed home if not for the draconian quarantine measures enacted by the Chinese government. In effect, the quarantines are accelerating the spread of the virus to other countries due to this “fleeing” effect.

Much of this likely stems from the fact that China is now running door-to-door roundups of citizens, medically kidnapping them and throwing them into “quarantine prison camps” with bars on the windows of each room. Nobody wants to end up a prisoner in one of these “death hospitals.”

The coronavirus pandemic is currently spreading at the rate of roughly a 20% increase per day, achieving sustained, exponential growth that has spread to three cruise ships, dozens of countries and an ever-expanding list of mainland Chinese cities.

The initial attempt to quarantine the Wuhan region in order to stop the coronavirus has clearly failed. Yet the WHO, the CDC and the totally discredited mainstream media are still lying to the public, falsely claiming this outbreak is “under control” and “poses no risk to America.” Those claims are malicious, dangerous lies that even the CDC’s own scientists are contradicting in their public statements.

In addition, multiple health experts are now on the record confirming this pandemic has broken containment and will spread globally.

Any media source saying this is “no big deal” is actually trying to make the pandemic worse by keeping people uninformed and unprepared.