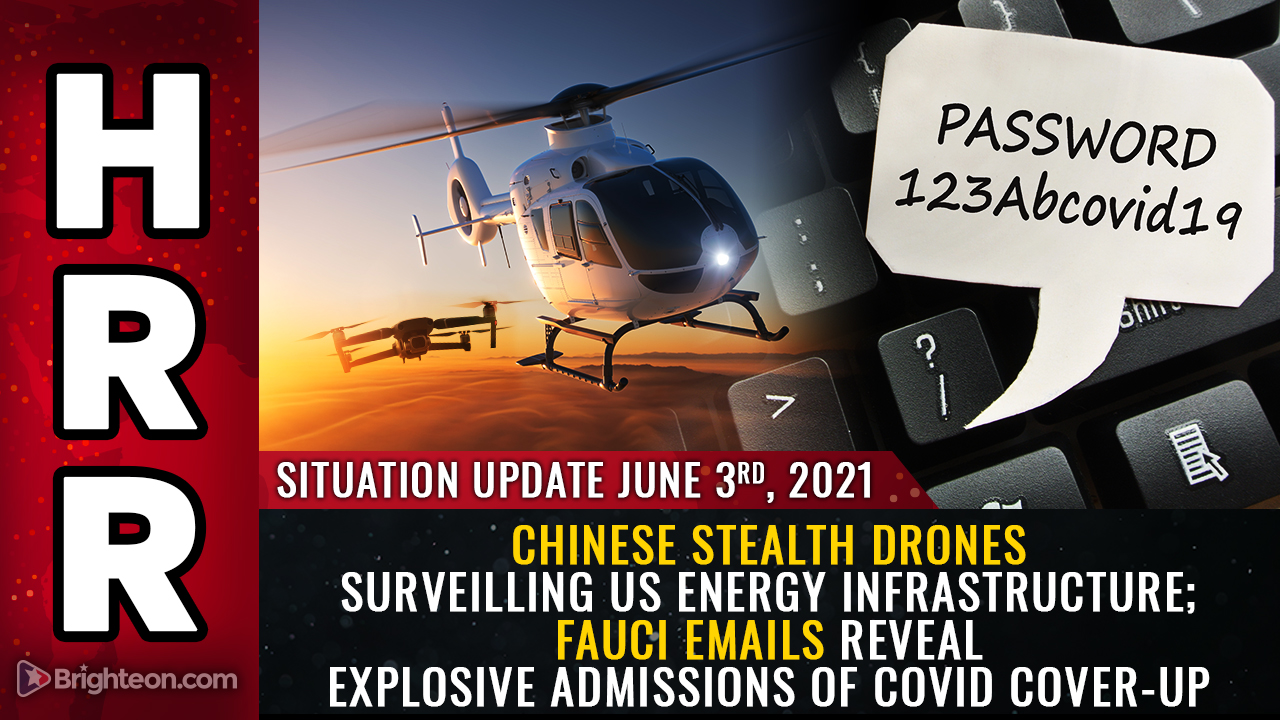 presents two bombshell stories, both pointing to the increasingly irrefutable fact that we are living in a state of war right now, and America is being relentlessly attacked by communist China via multiple vectors (bioweapons, cyber war, etc.).

Today we have the bizarre story about a highly customized stealth drone spotted over the Davis-Monthan Air Force Base in Tucson, AZ. This drone is invisible to air traffic control radar and couldn’t even be seen with night vision goggles, reportedly. It was somehow spotted by a Customs and Border Protection (CBP) helicopter, which was joined by a Tucson Police helicopter to try to chase down the drone. It evaded them both with high speed maneuvers, climbing to 14,000 feet, then vanishing.

Before fleeing the area, the quadcopter drone — described as 5 feet in length and 3 feet wide — was monitoring critical US energy infrastructure as well as Air Force Base operations, including fighter jet runways.

This was all covered in an article published by TheDrive.com. From that article:

…the unusual drone was first spotted near a complex of fuel tanks just west of Runway 12 at the U.S. Air Force’s Davis-Monthan Air Force Base… The description of the drone’s initial observed location would appear to match the location of a terminal owned by Kinder Morgan, an energy company that operates fuel pipelines and other energy infrastructure.

…this incident would add to the growing number of recent drone incursions which have worryingly occurred in military-controlled airspace or near sensitive installations.

I reached out to several of my contacts who are current or former military, and I was told that they believe this drone is a communist China stealth surveillance drone. It appears to be capable of long-range flight with high speed maneuvers, and it carries a thermal camera to see through fog and clouds while conducting secret observation missions on US strategic assets (such as pipelines, oil refineries, military bases, etc.).

Importantly, these drones can be outfitted with several hundred pounds of high explosives and transformed into “kamikazee drones” that are essentially armed cruise missiles. Since they avoid any radar signature, they can slam right into any intended target, and the U.S. military has zero defense against these kamikazee drones. They can also be launched from Mexico, then flown into U.S. airspace and activated there.

My contacts believe there are hundreds of such drones operating right now in U.S. air space, and they feed images and thermal video streams to communist Chinese satellites, which then relay it back to servers in China. This allows China to acquire videos and imagery that are not possible to acquire via satellite. For one, these drones can look horizontally and see inside open aircraft hangars, for example, to obtain counts of U.S. military aircraft. Since they are also much closer to the ground than satellites, they produce far more detailed images and videos.

Sadly, the “woke” Pentagon is now focused entirely on turning the military into a soy boy transgender festival of libtardia rather than defending America against its enemies. Thus, the Pentagon has proven to be utterly incapable of doing anything useful to counter this obvious and powerful threat to national security. Instead of getting communist China out of U.S. air space, our U.S. Secretary of Defense (Austin) wants to get patriots out of the military.

This is all covered in today’s Situation Update podcast, which also takes a look at the Fauci email bombshell story that’s now breaking: