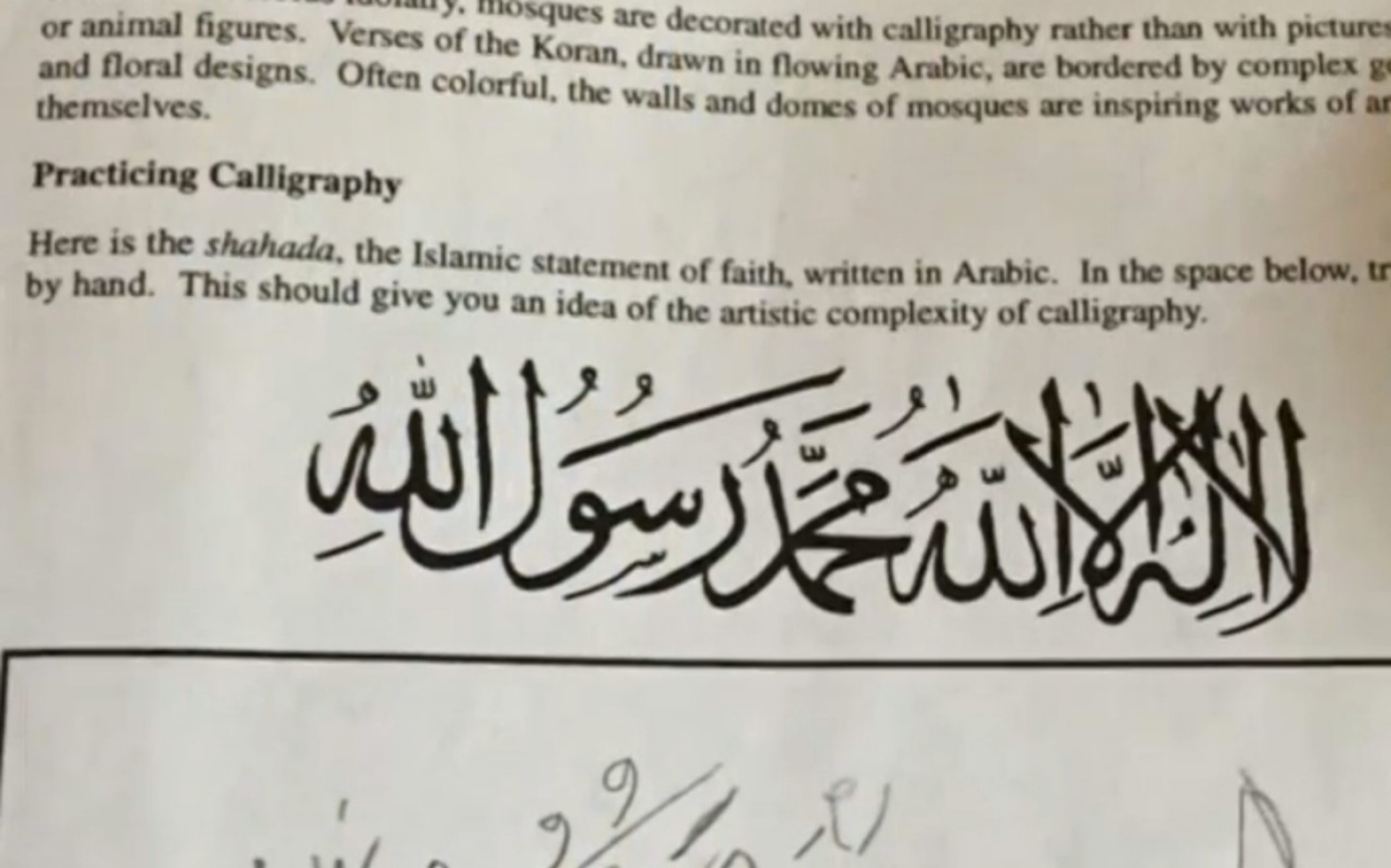 Brilliant! It is long past due. Dawah in the public schools is a violation of the Establishment clause. There is no good reason for children to be forced to recite the shahada.

During the 2014-2015 school year, a Christian teenage girl was forced to recite the Islamic conversion creed — the Shahada — in writing for her 11th-grade class. She was also taught that “Most Muslims’ faith is stronger than the average Christian.” The Thomas More Law Center (TMLC) sued the school responsible, and the Fourth Circuit Court of Appeals ruled with the school. TMLC appealed to the Supreme Court, filing a Writ of Certiorari on Monday.

“Under the guise of teaching history or social studies, public schools across America are promoting the religion of Islam in ways that would never be tolerated for Christianity or any other religion,” TMLC President and Chief Counsel Richard Thompson said in a statement. “I’m not aware of any school which has forced a Muslim student to write the Lord’s Prayer or John 3:16: ‘For God so loved the world, that he gave his only begotten Son, that whosoever believeth in him should not perish, but have everlasting life.’”

“Many public schools have become a hotbed of Islamic propaganda,” Thompson argued. “Teaching Islam in schools has gone far beyond a basic history lesson. Prompted by zealous Islamic activism and emboldened by confusing court decisions, schools are now bending over backwards to promote Islam while at the same time denigrate Christianity.”

“We are asking the Supreme Court to provide the necessary legal guidance to resolve the insidious discrimination against Christians in our public schools,” he concluded. 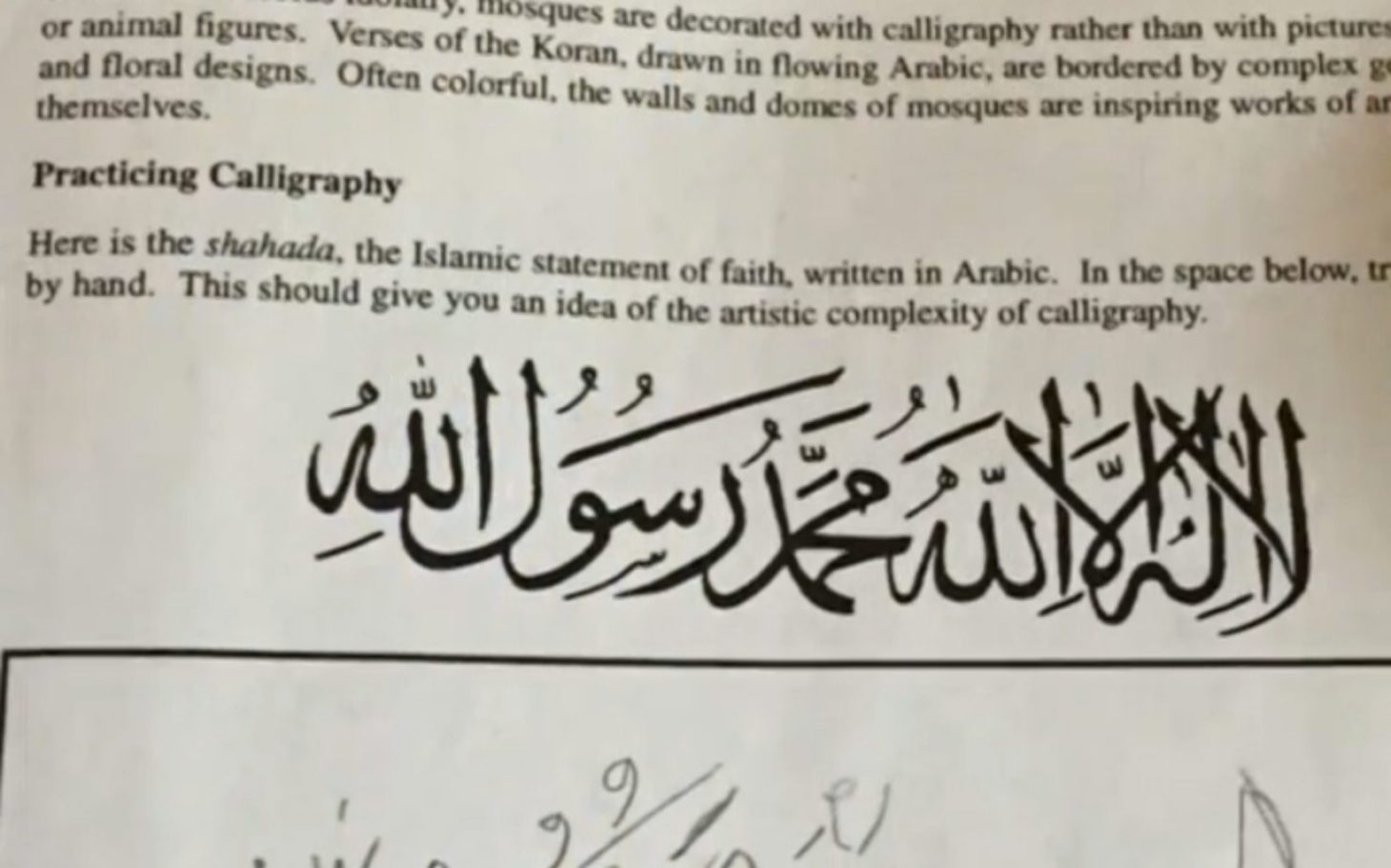 In Wood v. Arnold, the parents of Caleigh Wood, John and Melissa Wood, are suing Charles County Public Schools in Maryland, the county board of education, and Evelyn Arnold and Shannon Morris, principal and vice principal of La Plata High School.

TMLC noted five specific pro-Islam teachings that the 11th-grade teacher told Caleigh Wood from the Powerpoint presentation she gave in class (the underlining is original): “Most Muslims’ faith is stronger than the average Christian;” “Islam at heart is a peaceful religion;” Jihad is a “personal struggle in devotion to Islam, especially involving spiritual discipline;” “To Muslims, Allah is the same God that is worshiped in Christianity and Judaism;” “Men are the managers of the affairs of women” and “Righteous women are therefore obedient.” (To be fair, the Powerpoint did mention jihad as a “holy war” as well as a personal struggle.)

According to the TMLC filing, Wood was required to profess in writing the statement that “There is no god but Allah and Muhammad is the messenger of Allah.” This statement is known as the Shahada, the Islamic conversion creed. A person recites this declaration in order to convert to Islam and then prays and repeats it during the Muslim call to prayer. Wood said she sincerely believes that it is a sin to profess, by word or in writing, that there is any god except the Christian God.

Yet the school required her to write the Shahada and docked her points when she did not.

Her father also testified that his daughter and her classmates “were instructed that the Islamic religion is a fact while Christianity and Judaism are just beliefs.” The teacher told students that the “Qur’an is the word of Allah as revealed to Muhammad in the same way that Jews and Christians believe the Torah and the Gospels were revealed to Moses and the New Testament writers,” and that Muhammad was visited by the Angel Gabriel who proclaimed that there is only one true god.

While some instruction in Islam is certainly defensible, many of these teachings crossed the line into advocacy for Islam. Some are also just false. For instance, Muslims believe God directly revealed the Qur’an word for word. This is emphatically not the case with the Jewish and Christian scriptures, which believers say were inspired by God but written by humans in history. In fact, Christians consider the Gospels historical, journalistic documents recounting events the writers personally witnessed.

Claims like Islam being “at heart” peaceful, that Muslims have stronger faith than Christians in general, and that women should be obedient to Sharia (Islamic law that often requires them to wear head and body coverings in public or to stay home unless accompanied by a male relative) are extremely debatable.

While many Muslims reject Islamism — the idea that Sharia should be enforced by law — this radical Islam has deep roots in history, tracing back to Mohammed, who founded the first Islamic state. American freedom is compatible with many Islamic sects, but many more militate against it.

Muslims often follow their religious law more strictly than Christians, largely because Christianity is not a religion of law. This does not necessarily make their faith stronger.

The Fourth Circuit Court argued that this biased teaching did not violate the Lemon test for establishment of religion because the teaching of Islam was driven in part by a secular purpose, had the primary effect that neither advanced nor inhibited religion, and did not excessively entangle Church and State. If the teaching had not been biased in a pro-Islam direction, this may be defensible. After all, Americans should learn about Islam — just as they should learn about Islam and Judaism.

TMLC cited Abington School District v. Schempp (1963), in which the Supreme Court ruled that school-sponsored reading of the Bible was unconstitutional. “The pervasive religiosity and direct government involvement inhering in the prescription of prayer and Bible reading in public schools, during and as part of the curricular day, involving young impressionable children whose school attendance is statutorily compelled, and utilizing the prestige, power, and influence of school administration, staff, and authority, cannot realistically be termed simply accommodation, and must fall within the interdiction of the First Amendment,” TMLC quoted from Schempp.

This citation shows that the Supreme Court “has forwarded a stricter application of the Establishment Clause” where “impressionable youths are involved.”

At the time Schempp was decided, schools may have established Christianity to some degree. Yet since Schempp and similar rulings pushed the Bible out of public schools, Americans have lost out on the rich literary heritage and civic significance of the Bible. Religious literacy has reached dangerous lows, to the degree that journalists at America’s newspaper of record, The New York Times, lack a basic understanding of Christian doctrine.

Americans should have a basic understanding of what the major religions claim, especially Judaism, Christianity, Islam, Hinduism, and Buddhism. These faiths have impacted history in important ways, and students should have direct access to their history and texts in the classroom.

Although I am a Bible-believing Christian, I learned the Shahada and have no problem saying or writing it. If there were a fair standard where schools taught all the major religious conversion creeds (including John 3:16 along with the Shahada), I think there would be no problem with requiring students to know them. Perhaps students could still get marks for alternate versions, such as writing “g-d” for “god” so as to avoid sin.

Yet current law restricts teaching about religion, on the theory that young minds are too impressionable and that schools teaching the Bible would constitute an establishment of religion. Perhaps in early elementary school this may have some merit, but at least in high school, students should gain a basic understanding of these things.

In any case, if the Supreme Court precedent prevents Christian prayer and Bible reading in schools, it should also prohibit this kind of skewed Islamic teaching.