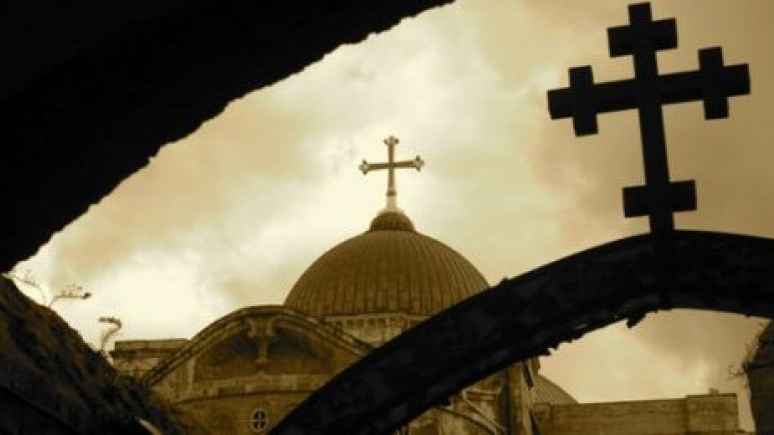 Editor’s Note: Claiming Jesus is the Son of God provokes a lot more than Muslims. In fact, when Jesus clearly stated such, Jews came after him to stone Him for blasphemy.

39 They answered him, “Abraham is our father.” Jesus said to them, “If you were Abraham’s children, you would be doing the works Abraham did, 40 but now you seek to kill me, a man who has told you the truth that I heard from God. This is not what Abraham did. 41 You are doing the works your father did.” They said to him, “We were not born of sexual immorality. We have one Father—even God.” 42 Jesus said to them, “If God were your Father, you would love me, for I came from God and I am here. I came not of my own accord, but he sent me. 43 Why do you not understand what I say? It is because you cannot bear to hear my word. 44 You are of your father the devil, and your will is to do your father’s desires. He was a murderer from the beginning, and has nothing to do with the truth, because there is no truth in him. When he lies, he speaks out of his own character, for he is a liar and the father of lies.45 But because I tell the truth, you do not believe me. 46 Which one of you convicts me of sin? If I tell the truth, why do you not believe me?47 Whoever is of God hears the words of God. The reason why you do not hear them is that you are not of God.”

48 The Jews answered him, “Are we not right in saying that you are a Samaritan and have a demon?” 49 Jesus answered, “I do not have a demon, but I honour my Father, and you dishonour me. 50 Yet I do not seek my own glory; there is One who seeks it, and he is the judge.51 Truly, truly, I say to you, if anyone keeps my word, he will never see death.” 52 The Jews said to him, “Now we know that you have a demon! Abraham died, as did the prophets, yet you say, ‘If anyone keeps my word, he will never taste death.’ 53 Are you greater than our father Abraham, who died? And the prophets died! Who do you make yourself out to be?” 54 Jesus answered, “If I glorify myself, my glory is nothing. It is my Father who glorifies me, of whom you say, ‘He is our God.’[c] 55 But you have not known him. I know him. If I were to say that I do not know him, I would be a liar like you, but I do know him and I keep his word. 56 Your father Abraham rejoiced that he would see my day. He saw it and was glad.” 57 So the Jews said to him, “You are not yet fifty years old, and have you seen Abraham?”[d] 58 Jesus said to them, “Truly, truly, I say to you, before Abraham was, I am.” 59 So they picked up stones to throw at him, but Jesus hid himself and went out of the temple. -John 8

“This was why the Jews were seeking all the more to kill him, because not only was he breaking the Sabbath, but he was even calling God his own Father, making himself equal with God.” -John 5:18

“31 The Jews picked up stones again to stone him. 32 Jesus answered them, “I have shown you many good works from the Father; for which of them are you going to stone me?” 33 The Jews answered him, “It is not for a good work that we are going to stone you but for blasphemy, because you, being a man, make yourself God.” 34 Jesus answered them, “Is it not written in your Law, ‘I said, you are gods’? 35 If he called them gods to whom the word of God came—and Scripture cannot be broken—36 do you say of him whom the Father consecrated and sent into the world, ‘You are blaspheming’, because I said, ‘I am the Son of God’? 37 If I am not doing the works of my Father, then do not believe me; 38 but if I do them, even though you do not believe me, believe the works, that you may know and understand that the Father is in me and I am in the Father.” -John 10

The fact that Jesus claims to be “I Am” in John 8 is nothing short of claiming to be the God who delivered the children of Israel from Egypt, who told Moses to tell them that “I Am” had sent him, and gave them the Law and brought them into the promised land. Sadly, many Jews, as well as Muslims and other religious people, reject Jesus as God, the Messiah, the Savior of the world. Many would as soon crucify Him again today, along with His followers. Still, Jesus came to save men from every tribe, people, nation and language (Revelation 5:9).

Buried in the concluding paragraphs of a Christmas Eve Washington Times report about Muslims in Uganda forcing Christians to convert to Islam was the extraordinary revelation that in that country, Muslims now consider any public statement of the Christian Faith to be a calculated insult to Muslims, for which they can justifiably exact revenge. This is, or should be, sobering news for the comfortable Christians of the West who have made an idol out of “interfaith dialogue” and fastidiously avoid saying anything remotely critical about Islam, even as the Muslim persecution of Christians continues worldwide.

“In June,” the Times reported, “a group of Muslims attacked Christian preachers in eastern Uganda during a ‘crusade,’ where Christians publicly profess their faith and invite others to join. Muslims in the town accused the Christians of mocking Islam by publicly saying Jesus was the Son of God.”

The Christians appealed to the Muslims to have respect for those of other faith; the Muslims responded with contempt. One Muslim, Abubakar Yusuf, declared: “We have now declared a jihad against them. We are not going to allow anybody to despise Islamic teachings at their church or crusade. We will seek revenge.”

How did the Christians “despise Islamic teachings”? By preaching aspects of Christianity, such as the divinity of Christ, that Islam denies. The Christians, knowing how delicate their situation was, would never have dreamed of actually saying something critical about Islam itself; but to the Muslims who heard them, just enunciating the tenets of their Christian faith was criticism enough. And they refused to stand for it.

A few years ago, when jihadis attacked AFDI’s Muhammad Art Exhibit and Cartoon Contest in Garland, Texas, some Christians castigated me for co-sponsoring and speaking at the event. They said that Pamela Geller and I, as co-organizers of the event, were being needlessly provocative, poking Muslims in the eye, goading them, etc.

These charitable and enlightened Christians said that Christians should instead be deferential to others’ religious sensibilities. At the time, I responded to these people by explaining that giving in to violent intimidation (our event was a response to the jihad murder of the Charlie Hebdo Muhammad cartoonists in Paris) would only encourage more violent intimidation, and that given the fact that Muslims frequently found even basic expressions of Christian faith to be “provocative,” they were effectively cutting the ground out from under themselves and their children, making it impossible for them to practice Christianity in the future.

These incidents in Uganda are proof that this was correct. In declaring jihad and stating that the Muslims were now on a quest for revenge, Abubakar Yusuf and the Muslims who agree with him are in effect saying that the public expression of the Christian Faith mocks Islam and despises Islamic teachings. Abubakar Yusuf’s announcement that the Muslims had “declared jihad” against the Christians and would “seek revenge” against them was tantamount to a declaration that the Christians must submit to the hegemony of the Muslims, not daring to practice their faith openly, but only in private, behind closed door, and at the sufferance of their Muslim overlords.

This is exactly the status that Islamic law prescribes for Christians in lands governed by Islamic law, and so it is clear that Abubakar Yusuf is no lone fanatic, but is enunciating what many Muslims in Uganda believe to be only right and proper.

The lesson is clear, and not just for Uganda. If the advice of the cosseted, suburban Western Christians who were excoriating me for the Garland event is to be heeded, Christians should make no public expression of their faith at all, and convert to Islam, so as to avoid mocking, provoking, and offending Muslims, and poking them in the eye.

And what it comes to it, that is most likely the exact thing that those Christians will do.