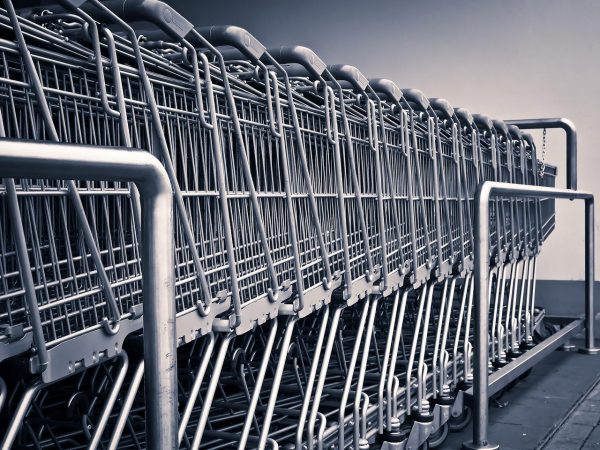 What we have witnessed so far is just the beginning of the story. The global response to the COVID pandemic during 2020 and 2021 created the most epic supply chain crisis in modern times, and now “black swan events” such as the war in Ukraine and the bird flu pandemic are making that supply chain crisis even worse. Unfortunately, more global difficulties are coming. There will be more war, there will be more pestilences, there will be more natural disasters, and even the United Nations is admitting that we are heading into the worst global food crisis since World War II. So if you think that global supply chain problems are severe now, just wait until you see what is coming next.

If you go into most major retailers today, you will notice that stock levels are lower than usual and there are some empty shelves.

But most items are still available most of the time, and that is good news.

Of course there are certain product categories that have been experiencing chronic shortages for an extended period of time. For example, supplies of canned pet food have been extremely tight for months on end…

The next time you go to the pet store don’t be surprised to see some empty shelves.

Many pet stores are facing a shortage on canned pet food.

Right now, there just aren’t enough cheap sources of chicken and turkey due to the bird flu pandemic, there is an ongoing shortage of aluminum, and there is a shortage of factory workers.

So the canned pet food shortage is not likely to be fixed any time soon.

Another shortage that is going to affect much of the country as we head into the summer months is the growing chlorine shortage.

I was not even aware of this shortage until a reader alerted me. Apparently this shortage was originally caused by the destruction of a manufacturing facility in Louisiana by Hurricane Laura…

While the pandemic takes its share of the blame, the even larger reason for the current chlorine shortage is that a major chlorine manufacturing plant in Louisiana was destroyed by Hurricane Laura in late 2020. A fire on the premises leveled the facilities and took nearly 40% of the country’s chlorine tablet supply with it.

The manufacturing plant is being rebuilt and is currently under construction; it was due to reopen by mid-to-late 2022, but those plans could be pushed back due to the ongoing construction material shortages.

Anyone that is trying to build a home knows how painful the construction material shortage has become, and I anticipate that it will only become more severe in 2023 and beyond.

Meanwhile, the nationwide baby formula shortage just continues to get even worse…

Janis Burnson is one of many parents having to work around a national baby formula shortage.

“Go around in our area, St. George, any stores I can, can’t find anything around here. I have friends in northern Utah, they’re having to send me stuff, so I’m having to pay even more,” she says.

One local reporter in southern Utah decided to check this out for herself, and when she visited local stores she discovered “bare shelves where baby formula should be.”

But at least we can be glad that things are not as bad here as they are in Europe.

Over there, widespread rationing of certain products has already begun. For example, it was just announced that Tesco is now limiting each customer to three bottles of cooking oil…

If record-high food prices weren’t enough. The Russia-Ukraine conflict has choked off the world of sunflower oil supply, forcing the largest supermarket in the UK to begin rationing.

The Guardian reports that Tesco, with more than 4,000 retail stores, placed buying limits of three cooking oil bottles per customer. It follows Waitrose and Morrisons, other supermarket chains that set limits of just two per customer.

This particular shortage is directly related to the war in Ukraine, and David Einhorn is warning that this war is making a whole host of our ongoing problems even worse…

The common refrain about COVID was that it sped up changes and trends that were already happening. We believe the same is true of the war. Inflation, supply chain problems, and shortages of energy, food, raw materials and labor were already issues that the war has now accelerated.

Sadly, he is quite correct, and at this point there appears to be no hope that this war will end any time soon.

Russia and Ukraine normally account for approximately 30 percent of all global wheat exports, and we were already facing an unprecedented global food crisis even before the war erupted.

When U.S. Senator Roger Marshall was recently asked about this, he openly admitted that a “worldwide famine” is definitely going to happen…

“Did you just say there will be a famine in Europe in the next two years?” Host Maria Bartiromo asked.

“This will be a worldwide famine. I think it will be even worse next year than this year. So if 12, 15% of the wheat comes from Ukraine that’s exported, and they’re having problems getting fertilizer, they’re having tractors in the field, all the diesel fuel is going towards their war efforts, right?” the senator said.

Prior to 2022, can you ever remember a time when a sitting member of the U.S. Senate publicly warned us that a “worldwide famine” was coming?

The good news is that nobody is starving to death in the United States right now.

But food prices are certainly going up dramatically, and the mainstream media is doing lots of stories about it. For example, the following originally comes from USA Today…

Kevin Tave stretches a pot of spaghetti for three days of meals. Esmerelda Cortez gets eggs and bread from the food bank so she can afford laundry detergent at the store. Donnie Whitfield buys generic cereal instead of the Kellogg’s he prefers.

Although unemployment continues dropping and wages are on the rise, all across the country, low-income people are struggling to put food on the table as skyrocketing inflation and high gas prices take a bigger bite of their already-small paychecks.

Needless to say, as conditions deteriorate it is not a good thing for Joe Biden’s approval ratings…

During Joe Biden’s fifth quarter in office, which began on January 20 and ended on April 19, an average of 41.3% of U.S. adults approved of the job he was doing as president. The latest average is essentially unchanged from the 41.7% in his fourth quarter but significantly lower than his first three quarterly averages.

But what most Americans don’t understand is that it is too late for a political solution to this crisis.

No matter what Joe Biden and his minions decide to do, they are not going to be able to prevent the nightmarish conditions which are rapidly approaching.

As Senator Marshall admitted, there will be a worldwide famine.

There is no avoiding that now.

These are such troubled times, and they are only going to become even more troubled as the months roll along.