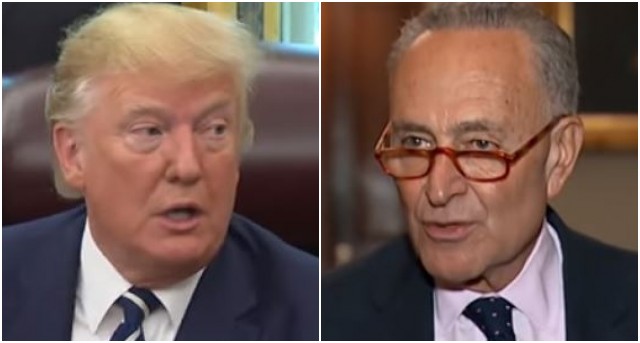 Claiming that the evidence against the president was “conclusive,” Schumer added, “And if the president does it in three months, they should impeach him again.”

The minority leader was responding to a question from a reporter asking if the Senate was ready to “put impeachment to bed” after failing to convict the president in convincing fashion.

“Look, this idea, we have too many impeachments, too few impeachments, the standard should not be how many or what’s politically right or wrong,” said Schumer, who was opposed to the impeachment of Democratic President Bill Clinton in 1998.

“The standard should be, did the president commit high crimes and misdemeanors? I think it’s conclusive that the president did,” he continued.

Republicans criticized House Democrats for returning articles of impeachment they say did not include any “high crimes and misdemeanors” and were based purely on political differences with the president.

The two articles — abuse of power and obstruction of Congress — did not even mention a “quid pro quo” Trump allegedly demanded of the Ukrainian government, that Kiev investigation Joe and Hunter Biden on corruption allegations in exchange for receiving lethal U.S. military aid.

The quid pro quo was first reported by a whistleblower believed to be a CIA employee who had ties to then-Vice President Joe Biden.

The president’s defenders noted as well that it was Biden who demanded a quid pro quo of then-Ukrainian President Petro Poroshenko, refusing to give Ukraine $1 billion in loan guarantees unless a state prosecutor looking into corruption involving a company that had hired son Hunter Biden was fired.

The prosecutor, Viktor Shokin, was indeed fired, as Biden claimed at a Council on Foreign Relations event in 2018 which was captured on video.