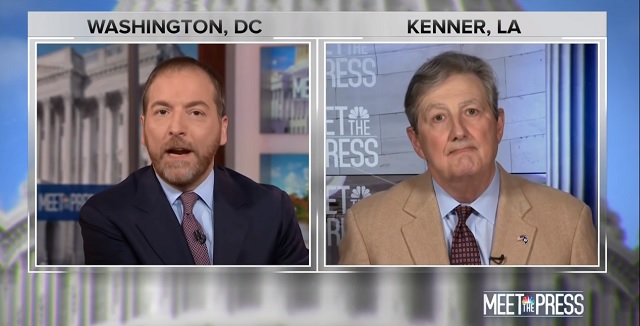 He made the claim while ranting about the importance of facts.

“When does opinion, when does opinion become fact?” Todd said while arrogantly lecturing Sen. John Kennedy after he raised the issue of Ukrainian meddling. “Does 17 intelligence services saying it, does every western intelligence ally saying Russia did this? I’m just sort of confused, at what point is it no longer an opinion for you?”

This 17 intelligence agencies claim was repeated hundreds if not thousands of times by the mass media before the New York Times officially admitted it was false in a lengthy correction in June 2017.

“Former candidate Hillary Clinton made the claim in late May that all 17 intelligence agencies agreed ‘that the Russians ran an extensive information war against my campaign to influence voters in the election,'” The Daily Caller reported in 2017.

Though dozens of mass media outlets praised Todd for his unhinged rant, NewsBusters was the only outlet I could find which fact-checked his falsehood.