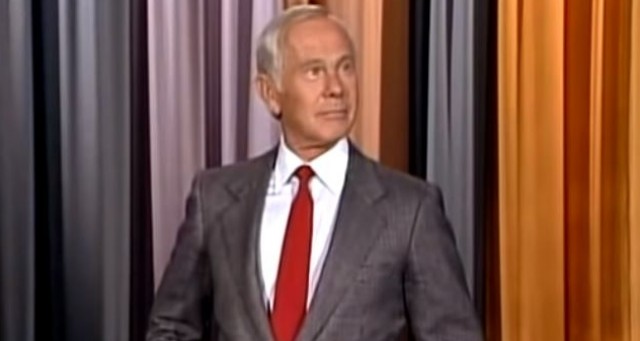 Watch as Johnny Carson rips a corrupt Joe Biden to pieces more than thirty years ago:

Now THAT is funny, and some things never change!

Too bad late night TV is no longer funny like in Johnny’s day.

Here’s the backstory on Biden’s failed Presidential bid in 1987 and Johnny’s joke:

Here’s the latest on corrupt Uncle Joe’s current campaign for President in 2020, via Reuters:

“I don’t think Donald Trump is capable of understanding that – he doesn’t seem to have any sense of empathy at all,” Biden said before an audience of more than 200 people in Scranton, Pennsylvania, the Rust Belt town where he grew up.

Biden said Trump is squandering a strong economy left behind by former President Barack Obama, whom Biden served as vice president. Biden has focused his fire on the Republican president instead of the rivals in his own Democratic party.

“The middle class built this country,” Biden said, but “they’re in trouble” with many lacking healthcare or struggling to pay their bills.

Pennsylvania will be a key to the 2020 presidential election. Trump won the state in 2016 against Democrat Hillary Clinton by just 44,292 votes.

Trump is due to speak later on Wednesday at an oil-and-gas industry event in Pittsburgh. A spokeswoman for his campaign, Erin Perrine, said in a statement that Biden is out of touch with the American middle class.

“Under the Trump Administration workers are thriving, unemployment has hit record lows, wages are rising and all while taxes have been cut across the board – benefiting ALL Americans,” she said.

Biden turned his attention to the economy after spending much of the past several weeks attacking Trump for his decision to pull forces out of Syria and the president’s allegations, offered without evidence, about the foreign business dealings of Biden’s son Hunter.

Trump is running on a jobs-and-growth program, touting unemployment rates at multi-decade lows during the longest U.S. economic expansion on record. Yet many voters are angry over economic inequality and afraid of slowing growth and a potential recession as the benefits of a 2017 tax cut fade and tariffs on Chinese imports hurt American farmers and manufacturers.

The former vice president has promised to pay for his own plans largely by raising taxes on high-income earners. Biden would, for instance, hike the marginal tax rate on the highest earners back to 39.6% from 37%, to which it was lowered under the Republicans’ 2017 tax bill.