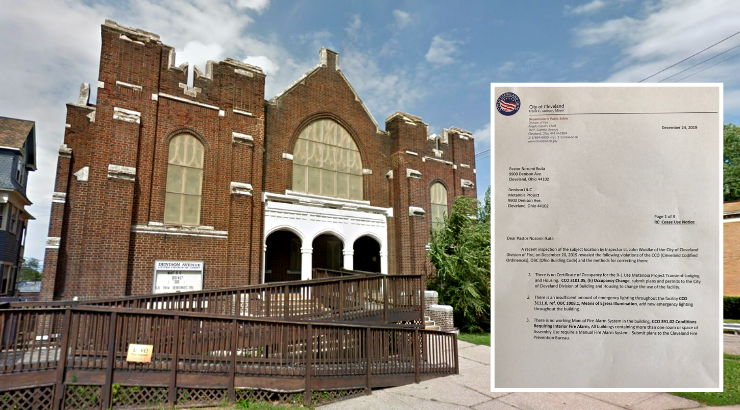 Earlier this week, on Christmas Eve, an order from the city of Cleveland was posted on the door of the Denison Avenue United Church of Christ, demanding that they kick out the homeless people that they had been allowing to sleep on their property or face losing their status with the city as a religious organization.

The order came from the Cleveland Division of Fire, citing code violations that they claim are dangerous for the inhabitants. The city is following the letter of the law, in this case suggesting that it is illegal to change the official use of the building without first filling out the required paperwork and making significant changes to the property.

According to the city’s building department, for the church to give shelter to homeless people, they would need to go through a costly process of not only updating the building but also getting the required permits and licenses that would designate the building as a homeless shelter.

Today, on Christmas Eve, Denison UCC was issued a Cease of Use notice even after Fire Chief Calvillo agreed to meet this AM as a result of yesterday’s action.

Let’s not forget that these threats arise from Councilwoman Brady’s efforts to keep homeless people out of her ward.

Today, on Christmas Eve, Denison UCC was issued a Cease of Use notice even after Fire Chief Calvillo agreed to meet this AM as a result of yesterday’s action.

Let’s not forget that these threats arise from Councilwoman Brady’s efforts to keep homeless people out of her ward. pic.twitter.com/CIMWluJH5i

Pastor Nozomi Ikuta has promised to appeal the ruling, saying that the church has been battling the city for months over their right to help the homeless.

“According to the city, it is improper for us to allow the Metanoia Project to use our building to provide overnight hospitality. They are telling us to apply to change the use of our building from a church to a shelter,” Ikuta told Cleveland.com.

Ikuta said that the church is happy to make changes to their building to make it safer, but she doesn’t believe that the church should have to change its designated purpose.

“In essence, this forces us to choose between our identity as a church and helping homeless people. We want to work with the fire department to resolve any concerns it might have, but we don’t think we should have to stop being a church just so we can help keep people off the street,” she said.

Among the changes that are required by the fire department are updates to the building’s fire alarm system, adding fire extinguishers and exit sights, along with fire sprinklers and other safety measures.

Local homeless advocates have argued that it is more dangerous to keep these people out on the streets than it is to house them in a building that may not be entirely up to code.

“Six people have frozen to death over the past few years and the unsheltered homeless population continues to rise,” NEOCH executive director, Chris Knestrick told Scene.