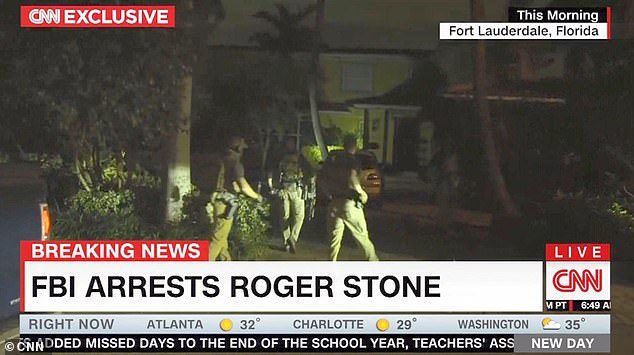 In response to the accusations by President Trump and others, that CNN had received an inside tip about the Roger Stone raid from the FBI, the news network published a whole article claiming that it had gotten the scoop by putting together various clues.

1. There was no purpose to such an aggressive FBI raid without a camera crew standing by.

Previous defendants had been allowed to turn themselves in. Why would it take multiple vehicles and personnel to arrest one man in his sixties? There’s nothing resembling practical necessity here. And, without cameras standing by to broadcast the footage, the entire effect would have been lost.

Without the certain knowledge that a camera crew would be on the spot to capture the scene, there was no reason not to just inform Stone’s lawyer and arrange for his surrender.

2. CNN’s piece explains how its people might have guessed that a Stone arrest was coming. But there was nothing special about that. Everyone and their brother knew it was coming.

What CNN fails to explain is how it knew that a raid on his home was coming.

As mentioned above, defendants have usually been told to come in and surrender. The raid was a waste of resources and manpower. There was no reason for it other than theatrics.

And, if the guesswork that led to CNN being there with a camera crew had been publicly available, then there would have been other camera crews there.

The raid only happened because a camera crew would be there. The only way CNN could have known that Roger Stone wouldn’t just show up and turn himself in, that there would be a theatrical raid, is through an inside tip.

Occam’s Razor tells us that the FBI tipped off CNN. And that needs to be investigated.