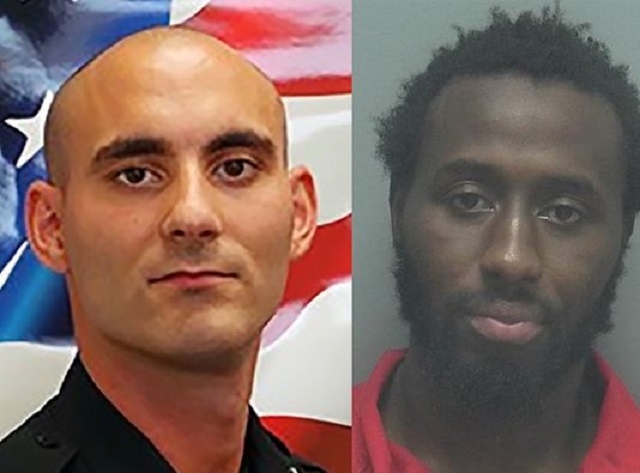 CNN, MSNBC, The New York Times and The Washington Post have all ignored the story of police officer Adam Jobbers-Miller who was allegedly shot in the head by Haitian immigrant Wisner Desmaret on Saturday in Fort Myers, Florida.

The U.S. Immigration and Customs Enforcement agency filed a detainer last Sunday against the man suspected of shooting a Fort Myers police officer in the head Saturday night.

Fort Myers police Officer Adam Jobbers-Miller remains in Lee Memorial Hospital in “critical but stable condition” after he was shot responding to a call near the Marathon service station at Flint Drive and Dr. Martin Luther King Jr. Boulevard.

Tammy Spicer, spokeswoman for ICE, Central and Northern Florida, confirmed Tuesday that ICE had placed a detainer on shooting suspect Wisner Desmaret, who the agency listed as a Haitian national.

An immigration detainer is a tool used by ICE and Department of Homeland Security officials to identify individuals who could be deported that are held in jails or prisons nationwide.

The ICE detainer policy, from its website, states: “ICE places detainers on aliens who have been arrested on local criminal charges and for whom ICE possesses probable cause to believe that they are removable from the United States, so that ICE can take custody of the alien when he or she is released from local custody.”

An ICE hold had also been previously requested for Desmaret after a 2010 arrest for burglary, theft and possession of burglary tools. The state attorney’s office decided not to prosecute the case for what they said was insufficient evidence.

Spicer said she could not comment on the 2010 hold.

He should have been deported eight years ago.

The story is nowhere to be found on CNN, MSNBC, NBC News, The New York Times and The Washington Post.