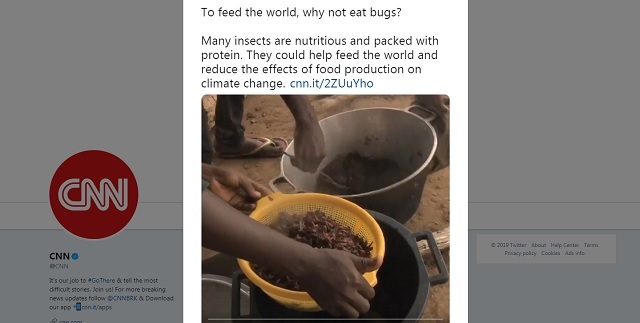 CNN wants America’s underclass to prepare themselves for a future where they’re forced to eat maggots while our ruling oligarchs with their boots placed firmly on our necks dine on foie gras and steak and become richer than ever.

To feed the world, why not eat bugs?

Many insects are nutritious and packed with protein. They could help feed the world and reduce the effects of food production on climate change. https://t.co/V20dozfGCu pic.twitter.com/q7iYZEdLYC

They tweeted out the same video twice in one day:

To feed the world, why not eat bugs?

Many insects are nutritious and packed with protein. They could help feed the world and reduce the effects of food production on climate change. https://t.co/kxtZhcx4jJ pic.twitter.com/QjiQOkDVGt

That last one was tweeted right after this one celebrating Big Tech’s mass deplatforming:

They want to take away our ability to make a living and force us to eat maggots.