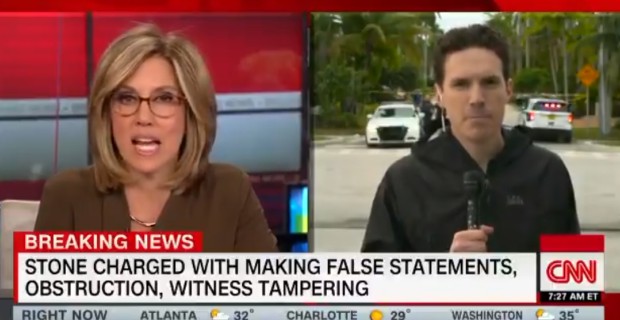 CNN producer David Shortell admitted that he was “waiting” outside Roger Stone’s house at 5am, an hour before FBI agents and police arrived to arrest the former Donald Trump associate.

Stone was arrested at 6am at his home in Ft. Lauderdale, Fla on a seven-count indictment which includes one count of obstruction, five counts of making false statements and one count of witness tampering.

However, Shortell subsequently gave an interview with New Day host Alisyn Camerota during which he admitted, while smiling throughout, that “we were here at 5am waiting for whatever was going to happen – it was dark – 6am just after the hour about a half dozen police vehicles with sirens….pulled in front of this Ft. Lauderdale home where Roger Stone lives.”

CNN producer @davidgshortell describes the moment Roger Stone was taken into custody by the FBI. The longtime Donald Trump associate has been indicted by a grand jury on charges brought by special counsel Robert Mueller https://t.co/wUJEIkKDTw pic.twitter.com/AJ3JWWSHs3

When questioned as to why he was outside Stone’s home over an hour before the arrest when neither Stone or his attorney even knew the raid was coming, Shortell claimed that his “reporter’s instinct” was to thank and that he “thought maybe something was happening” because of “unusual Grand Jury activity in Washington DC yesterday”.

Shortell also revealed that CNN reporters were the only journalists at the house when the arrest was made.

Earlier, former Fox News host Greta Van Susteren tweeted that the “FBI obviously tipped off CNN” before the raid, but later walked it back, claiming anyone could have tipped them off.

Shortell also commented on the heavily armed presence of the FBI agents and police officers involved in the arrest, stating that they were wearing “tactical vests” and carrying “large weapons”.