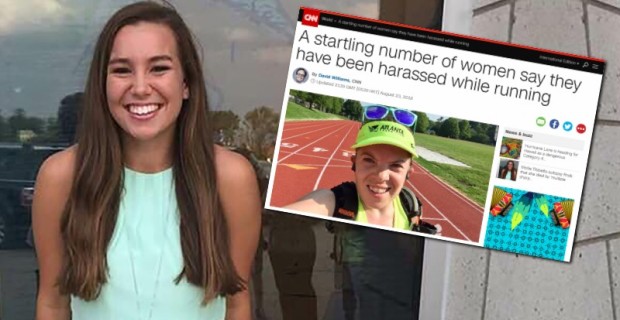 CNN responded to the murder of Mollie Tibbetts by an illegal alien by asking whether the larger problem is male harassment of female runners.

Desperate to avoid any discussion about the connection between illegal immigration and violent crime, CNN published an article which attempted to shift attention to the issue of women being harassed while they are out jogging.

Entitled A startling number of women say they have been harassed while running, the article admits that, “There’s a world of difference between catcalls or wolf whistles and the fatal violence that befell Mollie Tibbetts,” but then goes on to lump the two together anyway.

A startling number of women say they have been harassed while running https://t.co/UeAmvFddvW pic.twitter.com/umPMDOC9yj

“Tibbetts’ case has raised safety questions for women runners, a startling number of whom say they have faced harassment, or worse, from men who seem to view an athletic woman in shorts or jogging pants as an invitation for lewd or frightening behavior,” writes CNN’s David Williams.

The attempt to shift the narrative from illegal immigration to generic misogyny is an obvious effort to counter Trump supporters who say the case proves that stricter border controls are urgently needed.

“Female joggers don’t have this issue in Hungary,” remarked one respondent to the article, in reference to the fact that Hungary has a low immigrant population.

“Too bad all of the men who harass me while I go running look like illegal immigrants,” added another.

Given that the network, while it’s not lobbying to get its competition banned, is still pumping out dross like this, is it any wonder that CNN has experienced a 23 per cent drop in its total viewer average during primetime since last year?