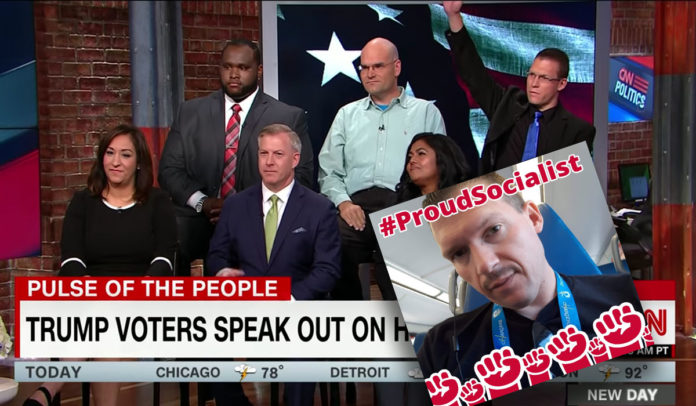 CNN headlined an alleged Trump voter’s regret about voting for a “monster” for president but the man’s social media accounts show he wants to ban all guns and describes himself as a “Proud Socialist.”

The Red Elephants has the scoop:

“I want to apologize to the nation for my vote for him,” Jeremy Montanez told CNN’s Alison Camerota on Tuesday. “It was the wrong thing to do. It was the biggest mistake I ever made.” Montanez bashed Trump for not doing enough to help Puerto Rico because “they’re not white skinned.”

“He said they want to just cry–they needed help,” he said. “Just because they’re not white skinned he doesn’t want to go down there and help them out?”

Jeremy Montanez also said Trump is “a suck-up to Vladimir Putin, because obviously that country has something on him.”

“He threw America under the bus,” during the Helsinki summit Montanez claimed.

Here’s some screenshots from Jeremy Montanez’s social media accounts, which he’s since put on lock down: Here he is on his own YouTube channel calling for total gun bans on June 14, 2016:

President Trump’s approval rating among Republican voters is at 88 percent, according to a recent WSJ/NBC poll.

The fake news is clearly desperate to get those numbers down by any means necessary.

This is why the fake news and the Democratic Party are lobbying so hard to ban all alternative news sites and Big Tech are doing everything in their power to deplatform us and suppress our reach.

They want to go back to the good old days where they could lie to the public unimpeded without their scams being swiftly exposed.