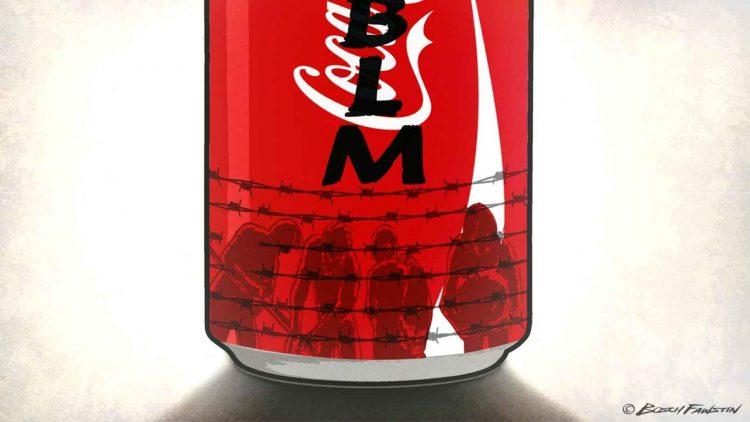 Coca-Cola would like you to know that it cares about oppression and believes America is evil.

In a rambling statement by CEO James Quincey, titled, “Where We Stand on Social Justice”, the head of the obesity conglomerate declared that he is, “outraged, sad, frustrated, angry.”

It’s hard that out there for a guy in a racist country who is only making an $18 million salary.

The Coke CEO then pledged to give money to the social justice usual suspects and the company joined a boycott of Facebook to pressure it into censoring Trump and conservatives.

The Congressional-Executive Commission on China had released a report in March on China’s forced labor practices. The CECC is a bipartisan group that includes a wide range of national politicians from Senator Tom Cotton and Senator Marco Rubio to Senator Dianne Feinstein and Rep. Marcy Kaptur.

That report led to the Uyghur Forced Labor Prevention Act which, among others, named Coca Cola and Nike. Why did the media bury the story? Because it had bad things to say about its advertisers.

Coke and some of the other companies involved denied everything, but a Wall Street Journal article noted that COFCO Tunhe supplies sugar to Coca-Cola and tomatoes to Heinz and Campbell. The Chinese state-owned company is the country’s largest food processor, the world’s second largest tomato processor, and one of the largest sugar processors in the world, with vast networks of plantations.

The corporations that decry racism in America allegedly benefit from the new Communist plantations.

“All the international brands trust us and buy our tomato purée: Heinz, Kraft, Unilever, Nestlé,” Cofco Tunhe Vice-President Yu Tianchi had once boasted.

Unilever, the British-Dutch conglomerate whose brands include Dove and Breyers, has been a loud voice in the social justice movement, and has joined the boycott to force Facebook to censor conservatives.

“We have a responsibility for racial justice,” Unilever declared.

But does that racial justice include the slaves of China’s Communist regime?

“We at Kraft Heinz say BLACK LIVES MATTER,” Patrico declared in a badly spelled and punctuated rant. “This week, we are talking with employees about one of our new Values, We demand diversity.”

But how exactly will Heinz-Kraft’s promise to expand “supplier diversity guidelines” play out in the tomato fields of Xinyang and its slave labor forces? Heinz-Kraft has been steadily cutting American jobs and outsourcing them abroad to reward the greed of big investors like Democrat donor Warren Buffett.

Slave labor is the cheapest labor of them all.

As China dominates tomato processing, all the social justice promises are obvious lies. The reality is toiling in the fields, men, women, and children, to do the hard work while execs preach social justice.

Coca-Cola meanwhile insisted that the COFCO facility the company used had passed an “internal audit”.

But what is COFCO?

Xinyang’s agriculture is dominated by the Xinjiang Production and Construction Corps (XPCC). The XPCC is a paramilitary Communist organization set up under Mao to colonize and control the region using soldiers and convict labor. Its commercial arm is the China Xinjian Group which turns the colonial production of the XPCC commissars into commercial products. COFCO is an affiliate of the XPCC and dominates the tomato and sugar export trade for western companies.

Ning Gaoning, the COCFO boss, touted production as a vital part of “the ‘New Socialistic Countryside.’

In China’s new economic boom, the XPCC is less able to depend on Han soldiers or volunteers, and has been accused of shifting to forced labor in Xinyang and using Xinyang Aid to move slave laborers around.

Even while Coke’s boss blathers about racism in America, he’s getting his sugar processed by a Communist paramilitary colonization enterprise that has been accused of using slave labor.

“The vast majority of them ran back within a few days.” COFCO executives were quoted as complaining about their workforce.

Xinyang Aid has been trying to avoid the problem by moving slave laborers so far away that there’s nowhere for them to run.

A description of tomato harvests in Xinyang by another XPCC company tells a familiar story. “the harvest is still done by hand, with workers earning one euro cent per kilo of harvested tomatoes. Children often go with their parents and work alongside them in the fields.”

A factory making shoes for Nike was “equipped with watchtowers, barbed-wire fences and police guard boxes.” Nike Shox were discovered being made in another factory by slave laborers shipped far from home to produce shoes for the sportswear giant. Too far for them to run away.

“We can walk around, but we can’t go back,” one worker said.

The same company that holds up Colin Kaepernick, a millionaire anti-American activist, as an icon of social justice, also profits from an alleged slave labor facility that moved to be closer to “the region’s cotton fields”. The millionaire victims of imaginary racism that Nike wants us to care about are on their billboards while modern day slaves still toil in the cotton fields because their lives don’t matter.

The dirty secret of the big Corporate Left brands is that behind the familiar names and commercials, are huge conglomerates and financial investors who cut costs by outsourcing their production to China. The Americans design and market, but the real work is done by huge Communist enterprises, either owned directly by the state or by oligarchs tied to the Communist leadership, whose names you don’t know.

All this leaves the executives with plenty of time to come up with new social justice initiatives and call the country and the American people whose wealth, future, and hopes they’ve stolen, racists.

Throwing millions at lefty organizations, announcing more diversity initiatives, firing qualified people and replacing them with activists, is cheap and doesn’t touch the real source of the wealth flowing from plantations in the People’s Republic of China. And it’s those plantations that are the new slavery.

The Black Lives Matter rhetoric doesn’t affect the root injustice at conglomerates wiping out American jobs, including black jobs, and replacing them with minorities laboring in the fields in Communist China.

Foreign plantations, slave labor forces doing the dirty work in the cotton fields, aren’t in America, but they are the source of the wealth of a new class of politically correct plutocrats who subsidize the Democrat Party and the Left, preaching about social justice from their mansions, while their slaves are kept out of sight thousands of miles away by the commissars of the Communist slave trade.

The Corporate Left has made a dirty deal with Communist China to divide and conquer America.

The repetition of the black nationalist slogan, Black Lives Matter, is convenient because it deliberately excludes the non-black slave labor on whose backs the Corporate Left has built its endless billions.

While Americans are endlessly lectured about a brief period of African slavery, China had imported African slaves for some six centuries. Much like the Middle Eastern trade in African slaves, this fact is generally buried in order to perpetuate the leftist myth that African slavery in America was unique.

Or, as Senator Tim Kaine falsely claimed, “The United States didn’t inherit slavery from anybody. We created it.”

Of course, we didn’t.

Slavery existed throughout history. The 1619 Project is a lie, but China, unlike America, was built on slave labor. And China is expanding its colonial presence into Africa, building factories, and abusing the native population in a search of cheap labor. The products of that new black slavery in Africa, like the trade in slaves in Asia, will be sold by all the familiar brands now declaring that Black Lives Matter.