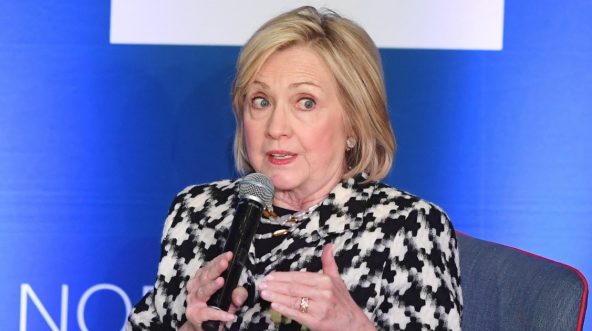 There it is. This is the real treason conspiracy.

Since the first day President Trump took office, the party of treason has conducted a witch hunt, a baseless political prosecution of the people’s president and his administration.

The FBI engaged in a systemic, strategic effort to stoke fears of Russian collusion during and after the 2016 presidential campaign.

This deeply corrupt organization needs to be cleaned out from top to bottom.

It is a disgrace to the nation.

Lest we forget, this is the same organization that sent an undercover agent to egg on ISIS jihadis to attack my free speech event in Garland, Texas in 2015, and had no one there to stop the attack.

Collusion. You’ve heard that word hundreds of times since Donald Trump was elected, with the implication that the president’s campaign team actively worked with Russia to defeat Hillary Clinton.

But what if it were actually the other way around? A stunning allegation from the Russian-speaking country of Ukraine is now suggesting that it may have been the Clinton team which colluded with a foreign government to win.

In an Op-Ed piece by investigative journalist John Solomon published by The Hill, the reporter laid out a compelling case that law enforcement officials in Ukraine may have purposely leaked financial records, which were then used to go after former Trump campaign manager Paul Manafort.

Manafort, of course, was the tip of the iceberg in the still-ongoing push by opponents of Trump to discredit and — if they get their way — impeach him. But the entire fishing expedition may have started with some shady deal-making in the former Soviet Union.

During an interview with Hill.TV, Prosecutor General Yurii Lutsenko, a Ukrainian government official, revealed that he has begun investigating whether others in his government leaked those financial records, possibly in an attempt to help Clinton win.

There’s a chain of evidence suggesting that this could be the case.

“Ukraine Prosecutor General Yurii Lutsenko’s probe was prompted by a Ukrainian parliamentarian’s release of a tape recording purporting to quote a top law enforcement official as saying his agency leaked the Manafort financial records to help Clinton’s campaign,” Solomon wrote for The Hill.

“The parliamentarian also secured a court ruling that the leak amounted to ‘an illegal intrusion into the American election campaign,’” Solomon continued, quoting what Prosecutor General Lutsenko told him directly.

“Today we will launch a criminal investigation about this and we will give legal assessment of this information,” Lutsenko said to the journalist.

The Ukrainian official also noted that the foreign agency possibly behind the leak was frequently in contact with U.S. embassy in Kiev during the Obama administration.

And, it’s also worth noting that the source of the Manafort financial records — which promoted his scandal — has remained a mystery so far. If Lutsenko is right, a key piece of the puzzle would fall into place and answer many open questions.

We already know that some officials within the FBI and the Justice Department saw it as their job to stop Trump, and some even discussed ways to remove him from office even after he won.

It doesn’t take a stretch of the imagination to consider that similar officials within the Obama-era State Department may have felt the same way — and an official letter from a congressman suggests that America’s ambassador in Ukraine may have been a vocal anti-Trump figure….